Amanda Marcotte criticizes Jonathan Last's WSJ article about declining fertility rates from a feminist perspective. I'm happy to join in from, among other things, a child-of-immigrants perspective. Here's what Last is worried about:


Low-fertility societies don't innovate because their incentives for consumption tilt overwhelmingly toward health care. They don't invest aggressively because, with the average age skewing higher, capital shifts to preserving and extending life and then begins drawing down. They cannot sustain social-security programs because they don't have enough workers to pay for the retirees. They cannot project power because they lack the money to pay for defense and the military-age manpower to serve in their armed forces.

Most of these things aren't even problems. If your society slows down its innovating and investing for the future because everybody is old and they don't have a future to worry about, what's the matter? They're all doing what's good for them, and they'll ride off happily into the sunset together. You end up with a less prosperous country after they're gone, but there's fewer mouths to feed, so on average everybody turns out fine.

And why does anyone really care about projecting power? If you work constructively to build a peaceful, rule-governed international framework, nations spend their money on fun consumption goods and useful investment goods instead of guns and bombs that have no constructive use. For all the problems with the Eurozone, Europe has solved that problem, and their reward is that they can take care of the poor and sick rather than spending money on paying young men to do things with guns that don't actually increase anyone's standard of living. Also they aren't engaging in trench warfare and firebombing each other's civilian populations. It's a good deal.

The one thing that is a genuine problem is the bit about sustaining social security programs. It's trouble if you don't have enough capable young people to create the resources that your old people need. And for us, it's a problem with a trivially easy solution. Young people all over the world want to work in our land of opportunity, and we can pick and choose the smartest and most capable, adding to our stock of young workers without having to spend much money raising or educating them. Having some other country raise a smart girl who comes over here at age 22 to work in our economy is a ridiculously good deal for us. Instead of having to change diapers and spend enormous sums on education, we get our Athena sprung right from the head of Zeus. 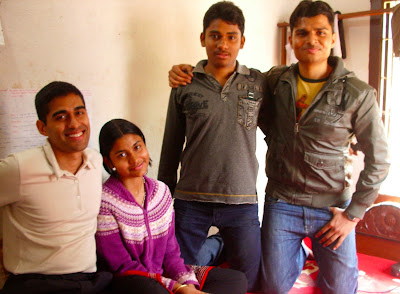 Last mentions immigration, and he has many bad reasons for thinking it can't solve our problems. First, he says that while we can get some immigrants now, this source of people is "unlikely to last" as global fertility rates decline. I think we can count on it lasting as long as we need. Even if Mexican fertility goes down, the expanding population of India will provide us plenty of smart young people. (The picture is me with my cousins Priyanka, Bikramjit, and Somnath, back on the village in West Bengal.) And when Indian fertility slides downward, some currently impoverished countries, maybe in Africa, will have achieved the stage of development where India is now. And when African fertility levels off and the global birthrate is in decline, it'll be the year 2100 and our factories will be cranking out robots who will happily do everything for us.

Nobody should be bugging women about how they aren't birthing enough babies. We can import top-quality people from Asia at far lower cost than we can produce them here.
Posted by Neil Sinhababu at 2/04/2013 03:43:00 PM

Hell, young, uneducated Mexicans who come here to work are a net gain for us, demographically. People who are willing to take one major step to improve their lives, for instance moving from the country they grew up in to start a new life in a strange place where they don't speak the language, but has more opportunities to better their situation, are likely to take further steps to improve themselves, move up to better jobs, make sure their kids get educated and start off with better jobs than they ever had.

Well-educated young people immigrating from India are even better.

I can't see a reason to believe that people from around the world will stop wanting to move here in the next 50 years. And after that, our demographic problem will be solved by the exiting of my increasingly g-g-geriatric generation from life's stage.

I read your blog immigrants can solve america's demographic problems, that is very interesting. Your blog is very informative. now you click here Manchester Escort and spend some time for entertainment.