Same sex marriage has majority and increasing support among Democrats and independents, and low support among Republicans that's increasing more slowly. This is a dynamic in which Democrats should be able to pass equality-oriented legislation with some help from Republicans who are facing trouble in general elections and need to appeal to independents. Meanwhile, Republicans who have to win their primaries and don't worry so much about general elections will want to stick to conservative views. So things bode well for the Republican Party as a whole remaining on the wrong side of a high-salience public issue, while Democrats as a whole remain on the right side. 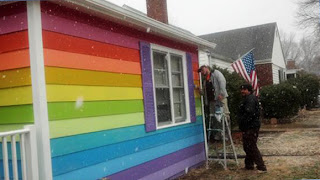 Add in the age-related demographics, with young folks being more supportive of equality, and you've got a situation where having good views on gay rights draws people to the Democratic side who will still be voting decades from now. If this makes them more attentive to Democratic media sources, we may be able to gain their support on other issues and keep them for the long term.

This is different from the way things used to be a decade ago, where the issue probably hurt Democrats more than it helped. But that cost has been paid, and it looks like a very good investment.
Posted by Neil Sinhababu at 3/20/2013 09:55:00 AM