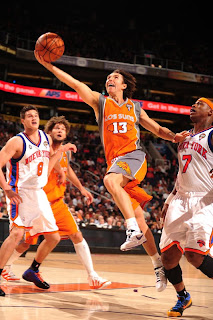 It's a good day to be a good person and a Suns fan, as Phoenix just announced that they're going to wear their Spanish-language "Los Suns" jerseys in their second playoff game against the San Antonio Spurs, both in celebration of Cinco De Mayo and in a protest against the Arizona immigration law. Steve Nash and owner Robert Sarver issued statements against the law.

Superstitious people might note that they won the last time they were wearing those jerseys, but it appears to have been against the Knicks, so we have no shortage of rational explanations.

Oh, and there was a game today. If you want to see Nash flying past defenders and hitting wacky layups on three consecutive possessions, you can see it here. He scored 17 in the first quarter and 33 total as the Suns beat the Spurs. Wish I could've seen it, but I don't know where one goes to watch the NBA during mornings in Singapore.

As far as watching live sports in Singapore, you can find a working stream or live p2p stream here: http://www.myp2p.eu/.