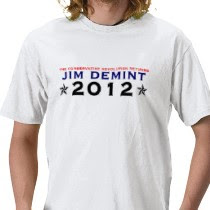 nking that Jim DeMint is a likely Republican candidate in 2012. And: buying up DeMint contracts on Intrade! I have an open order outstanding, so posting this is strictly speaking contrary to my financial interests. Please totally disagree and literally sell DeMint short so I can get a good deal on him.

Via TigerHawk, here's a poll of 70 conservative bloggers including questions about who helped and hurt them most in the 2010 elections. Here are the results:

1) Out of the following people and groups, which do you think was the most valuable player in the election cycle?

2) Out of the following people and groups, which do you think did the most disappointing job during the election cycle?

The idea that Sarah Palin is the Republican MVP strikes me as kind of bonkers, but it shouldn't surprise us very much that right-wing bloggers love her. What is interesting is that "Jim DeMint" is one of only two non-acronym names that the people at Right Wing News bother to mention in their poll, and that he gets the kind of response that an emerging candidate should get at this stage -- plugged-in members of the party base saying, "yeah, I like that guy!" and nobody really hating on him. Obviously he needs more love by the time 2012 comes around -- people have to really love the guy to vote for him. But there's a clear path from here to there. Activists tell other activists about you, and over a year it's all the way down to the rank and file.