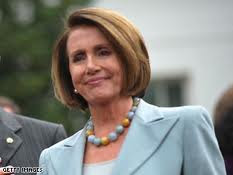 Since the Senate is unlikely to pass this, the practical implications are that tax cuts may expire (which is good, because it means more long-term revenue). Or we could end up with a situation where Democrats end up letting Republicans having a temporary extension of tax cuts for the rich in exchange for something we want (which could be good, if we get a good deal).

And in any case, we bank a Democratic vote for middle-class tax cuts which all these Republican incumbents opposed. Sadly we can't get next year's incoming GOP freshman on the hook for it, and a lot of them are from the districts we're going to need to win back. But still, it's a political and substantive win.
Posted by Neil Sinhababu at 12/02/2010 02:03:00 PM

I think you make an excellent point that I had forgotten ...

Nancy Pelosi has to approve any deal in the lame duck!

I want to see the GOP Senators get up on the floor of the Senate and filibuster this bill. They may keep the 2 million unemployed from getting their benefits, but the Dems can use those floor speeches to write copy for candidate ads in upcoming elections. I hope the tax cuts expire as they were intented to.

All this working for the rich was paid for by campaign donations and by lobbyists' payola. Make them work it and make it public.