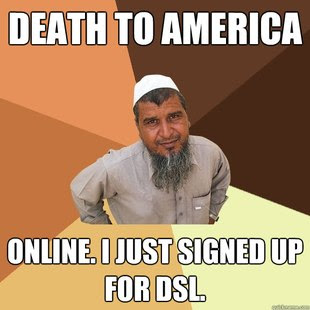 These quickmeme things are always uneven in quality because it's random people making new ones all the time, but I'm enjoying Ordinary Muslim Man.
There are 1.57 billion Muslims in the world, and a lot of them live in poor countries where there's all kinds of political strife for reasons that go beyond religion. Any group that big is going to have a few really destructive people in it who are actively involved in killing others. And it's going to have a huge majority of people who don't do anything like that.
15% of the population in Singapore is Muslim. It's mostly Malaysians, though there are also some Indians. And it's just about the safest place in the world!
Posted by Neil Sinhababu at 10/25/2011 11:37:00 AM