How Does The Oil Critique of US Foreign Policy Work? 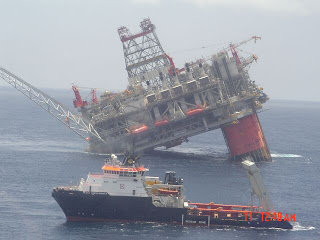 It makes a lot of sense to me that America's military interventions in the Middle East are driven in some unfortunate way by oil-related issues. But I really don't understand how the details work out.
Is American foreign policy about increasing the short-term profits of US oil companies? Increasing their long-term profits? Ensuring a stable flow of oil in the short-term? Ensuring a stable flow of oil in the long-term? Some of these things push in very different directions, and if you were trying to promote one, it would be at the cost of the other.
Suppose, for instance, you were trying to cause short-term increases in US oil company profits. Then you'd be interested in disrupting the stable flow of oil into the US in the short term. Perhaps you'd start wars and create oil supply disruptions in various parts of the world, especially where foreign oil companies operate. With supply reduced, global oil prices would rise, and American companies could charge more for their oil.
Short-term stability of the oil supply also trades off against long-term stability. Wars in the Middle East risk disrupting short-term stability of the oil supply. But presumably part of the reason you'd fight such a war (according to the oil critique) is to ensure long-term stability of the oil supply.
I'd guess that electoral incentives push towards short-term stability of the oil supply, since that has immediate economic relevance that could affect the voting behavior of swing voters. The funny thing is that it seems to push us towards supporting peace in the Middle East rather than war, and reducing short-term oil company profits rather than raising them.
And in any of the short-term versus long-term tradeoffs, you have to wonder what people's time horizons are. How much do politicians care about the oil supply 10 years from now? How much do CEOs care about the oil supply 10 years from now? At that point, the presidents and CEOs will likely be doing something else, so nothing is personally at stake for them. Are they trying to nobly look out for the futures of their institutions at personal cost... by supporting wars? It's hard for me to figure this out.
Posted by Neil Sinhababu at 2/06/2012 03:43:00 AM

US interventions normally have multiple goals which are in conflict with one another; this is one of the biggest reasons they generally produce such poor results from the perspective of anyone except the defense industry. Some factions wish to intervene in order to prevent disruptions and produce long-term stability, other factions are happy with disruptions and instability produced by the intervention itself and so support intervention for that reason. Chaos provides opportunities for the politically well-connected to steal resources, while that sort of corruption tends itself to increase instability and extend the chaos. But the factions which benefit from chaos would be cut loose by their political contacts if they were openly pro-chaos, so they try to justify the need to give resources to themselves by portraying themselves as champions of stability who are needed to sort out the mess. But, of course, with champions like that, the cause of stability makes no real progress.

My own guess is that making sure that oil producing countries price their oil in dollars is the biggest motive. This keeps the value of the dollar high despite an enormous trade deficit, which is central to our credit-fueled economy.