As many of the bloggers I read are supporters of feminism and animal welfare, I've seen lots of criticism of PETA for its ads involving nude or barely-clad women (most recently, Jeff Fecke). I'm more a fan of straightforward animal-welfare organizations like the Humane Society than PETA, mostly because I'm not willing to bet that PETA's tactics are an effective use of money. But criticism of PETA's nude ads on feminist grounds strikes me as deeply misguided.

What's wonderful about these ads is that they present the nude woman as being more virtuous than her clothed audience, and make her naked body symbolic of her virtue. She's on the right side of the issue, acting as a moral examplar through her nudity, and guiding us to become more virtuous people. (Typical example, and another.) I think the reason PETA does this is to make vegetarianism and animal welfare in general look less like hair-shirted ascetic doctrines, and more glamorous and fun. Now, you could criticize this by saying that the whole spectacle is so ridiculous the moral point is totally lost. I don't think this is right, but at least it's the right question to ask -- a question of whether PETA's tactics are effective, or cost-effective. Criticizing this as some kind of objectification of women is totally wrong. That she's posing nude for animal welfare doesn't make her an object, it makes her a better human being than you. 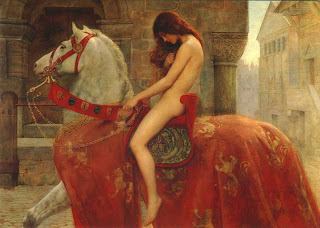 PETA's nude women remind us that it doesn't have to be that way. It's not something entirely foreign to our culture. The legend of Lady Godiva is the classic example. Much like PETA's actresses, Lady Godiva disrobed for a political publicity stunt where her goal had no connection to the tactic of being nude in public. (According to legend, she wanted her husband, Leofric of Mercia, to reduce taxes on the townsfolk.) The natural reaction to Lady Godiva isn't to mock her nudity, or to regard her as a helpless passive object of male desire. It's to regard the beauty of her naked body as a metaphor for the justice of her cause, and the unconventional nature of her act as essential to its heroism.

My sister, who spent the past summer interning as a reporter in DC, covered a PETA event near the Capitol and posted about it on her blog. (This is one of those occasions where blogging is a whole lot better than traditional reporting. I feel that I have a much better sense of the general feel of the event from reading her post than I would from reading a newspaper article.) It seems to have gone the way you'd hope it would -- "beaming guys in suits" were all excited about getting their pictures taken with women who were wearing clothes apparently made from lettuce. The way my sister writes it, the ability of the women to smoothly manage the unusual social situation generated by their nudity strikes me as really impressive. I guess that's a major professional skill of theirs.

I'm not saying that I'd give money to PETA to run more events like this -- after all, I'm pretty tight with money, and there's plenty of good folks out there to give it too. (Plus, I think the 'sea kittens' bit was silly.) But do I think they're spending money on something that sets back feminist goals? Not at all.
Posted by Neil Sinhababu at 8/31/2009 12:33:00 AM

I wouldn't say Lady Godiva's stunt had "no" relationship. Having people see your wife---your property---naked is emasculating, and therefore the point was, "Lower taxes, or I will continue to humiliate you and insult your manhood."

On the flip side, PETA's message seems to be, "Don't objectify animals, objectify women instead."

Well, it had no relationship to the issue of taxation. I'm trying to respond to the charge that nudity has nothing to do with animal rights by pointing out that nudity need not have such a connection to the topic in order to be an acceptable protest technique.

And given that PETA generally presents the nude women as being especially virtuous, it's hard for me to see how any sort of objectification is going on here. The general message is that these naked people are virtuous for being vegetarian. That's a great thing.

I think you're giving PETA too much credit, Neil. The thought process behind those ads (and protests) is: 'Look at this hot naked chick! Oh, and wearing fur is bad.' In the sense that nudity isn't necessary to the ads, they perpetuate a culture where women's naked, sexualized bodies are used simply as a way to catch the eye. Virtue doesn't really come into it.

I agree with your point, sadly most of the internet isn't going to read your actual blog post.

PETA has employed the idea that vegetarians are healthier and skinnier and therefore sexier for a long time now. The flip side of the naked ladies is the billboard fat shaming. The message is, "Want to be a worthy person who weighs makes it under the mandatory minimum for fuckability? Don't eat meat."

This isn't a small thing when veganism is used as a cover for eating disorders. The PETA types, including the Skinny Bitch authors, openly embrace using women's bad feelings about their inadequate beauty---and since we don't have access to technology to Photoshop our bodies, no one is good enough---to guilt them into veganism. I'm a vegetarian, but I still think that's screwed up.

Call me when they start using nude men.

There's certainly that element, Ursula, but if you look at the way that the nudity is presented in the surrounding text, they really go to lengths to play up how wonderful these people are. It's different from anything I see anywhere else where there are naked people.

I think that your interpretation is also legitimate, Go-To-Girl! And as long as the women involved regard that as an accurate expression of their preferences, it seems a fine thing.

I can see the problem that you're pointing to, Amanda, and I'm certainly not going to defend the billboards. But as far as I can see, the hot naked woman stunts are a pretty small offender in this regard, when compared to the way weight loss stuff is advertised in our culture as a whole. And given the significant health benefits of replacing meat with veggies, there's a case to be made that the benefits of drawing women in this way outweigh the harms on sheer health grounds.

Anonymous, here's the top post on the 'naked' section of their blog at this moment. Could I get your number?

Is PETA associated with those "Skinny Bitch" books, by the way? If so, I'd be quite happy to see them stop doing that thing and stop doing the fat billboards, and put the money into other operations which could include more naked veggie woman stunts.

I've never heard of the "Skinny Bitch" books until now, but a quick bit of googling doesn't uncover any actual connection between PETA and the authors, other than that both advocate a vegan diet.

I find some of your arguments intriguing, but I don't see PETA's message as being all that different from other marketing campaigns that use scantily-clad women. The message seems to be "This hottie likes product X, so you should too, if you want to get laid." The predominant use of female models for this drives home the message that males are the primary audience here. It's like the Carl's Jr ads except with veggie burgers instead of hamburgers.

I reject the premises that have you so tied up in knots here. There's nothing per se evil about men looking at pictures of beautiful women because they find beautiful women attractive. Nor is there anything per se evil about women posing in order to catch the attention of men. The man or woman in question can be criticized if he or she has a state of mind hostile to women; but otherwise there's (morally) nothing to see here.

I'd add that stigmatizing an ordinary male reaction with a nasty word ("objectification") doesn't change its moral status in the least.

I think Peta with their naked women and men have done more to put the animal issues before the public than anyone else has done. Which headline would you go to first, one that says treat animals kindly or one that say naked women protest for animals? I say any marketing technique that can get you to "look" is a good one. I, as a female, have no problems with women being used in such a fashion. I don't feel it demoralizes women because of the message it was meant to send. Ask around to people if they know who Peta is and ask the same ones if they know who HSUS is. The answer will probably be that they do know Peta and it is because of their marketing techniques.