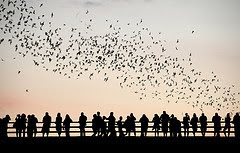 Brad Plumer lets us know about White Nose Syndrome, which has killed something like a million bats in North America. Bats are being found dead with white fungus on their noses. One of the awesome things about bats is that they can eat thousands of mosquitos a night. On a good night, a bat can eat its weight in pesky flying insects. They also pollinate crops.

That picture (from Talke Photography on Flickr) is a bunch of bats flying out from under a large bridge in Austin, where they sleep during the daytime. I saw it once, and it was pretty amazing -- the bats kept on flying out like that for about half an hour. I was impressed by the sheer number of bats that the bridge could shelter.
Posted by Neil Sinhababu at 8/14/2009 07:31:00 PM

Although I'm absolutely terrified of bats, I knew they do good things like eat mosquitoes. I did not know about their contribution to tequila, though, which considerably softens my attitude toward them. I also wonder if they could not isolate that fungus that seems to burn through stored fat and process/ refine it for human use. I would buy that.

Ha! Somebody should look into that (and do lots of safety testing).

There is an very good documentary video about White Nose Syndrome here:
http://ravenswoodmedia.ning.com/video/the-battle-for-bats-white-nose