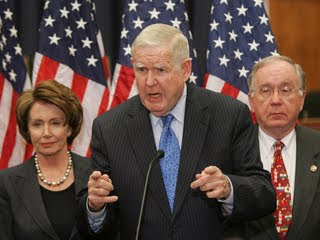 Sam Stein has a nice article remembering the highest moment of John Murtha's political career -- his advocacy of Iraq withdrawal. There's plenty more of Murtha that's not to like, including his anti-abortion views, addiction to defense pork, and willingness to do a variety of shady things to get more money for his district. But there's plenty I can forgive for his one shining moment:

It is rare that a political figure can literally re-chart the course of his political party. But in coming out for an immediate troop withdrawal, Murtha gave his Democratic colleagues the cover they needed to express their own reservations about the war. Those who worked closely with the congressman at the time -- both on and off the Hill -- credit him with elevating Iraq on the Democratic platform and in turn putting the party in a position to benefit from the wave of anti-war sentiment that swept the 2006 elections.

You've got to remember how crazy things were back then, and what Murtha and all the medals on his big chest were up against. Take this Washington Post article from as late as December 2005, titled "Democrats fear backlash at polls for antiwar remarks" where Emanuel and Hoyer are doing the bad things that make me love Nancy Pelosi:

These sources said the two leaders have expressed worry that Pelosi is playing into Bush's hands by suggesting Democrats are the party of a quick pullout -- an unpopular position in many of the most competitive House races.

"What I want Democrats to be discussing is what the president's policies have led to," Emanuel said. He added that once discussion turns to a formal timeline for troop withdrawals, "the how and when gets buried" and many voters take away only an impression that Democrats favor retreat.

Pelosi last week endorsed a plan by Rep. John P. Murtha (D-Pa.) to withdraw all U.S. troops in Iraq within six months, putting her at odds with most other Democratic leaders and leading foreign policy experts in her party.

Murtha and Pelosi were right, most other Democratic leaders and leading foreign policy experts in their party were wrong, Democrats won a tremendous victory in 2006 to retake both the House and the Senate, and as a result the official DC media view of the Iraq War moved closer to recognizing it as a catastrophe. Everybody who ran for the Democratic nomination after that came out against the Iraq War. A guy who opposed the Iraq War from the beginning won the nomination, became President, and is withdrawing troops from Iraq as we speak. December was the first month in which no US troops died in combat in Iraq.

Even the stuff that we're sure is going to work out well doesn't usually work out that well. Thanks, big fella, and if there's pork in heaven, I hope you land some kind of halo factory for the 12th district of Pennsylvania.
Posted by Neil Sinhababu at 2/09/2010 03:34:00 AM