The Victory Of Lincoln, Hammer Of The Banks 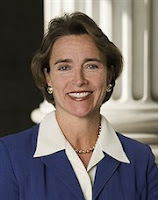 Somebody at the White House is dissing on union support of Bill Halter in his primary loss to Blanche Lincoln, saying that "Organized labor just flushed $10 million of their members' money down the toilet on a pointless exercise." I think Brian Montopoli is right that Lincoln's close call still works to labor's advantage, just because it'll put some fear into Democrats in the future. I don't know if that was worth more or less than $10 million, but it's something.

We should also thank the Bill Halter coalition for scaring Lincoln into helping out on derivatives regulation. It's hard for me to see why she would've been so useful without a primary challenge from the left. I don't understand financial regulation well enough to know how much Lincoln's contributions are worth, but my guess is that organized labor just bought America a gift worth more than the price they paid.

A 3000-vote election result is a close one that admits of many explanations, and one of the stories you could tell about it is that Lincoln won the primary by taking on the banks. Derivatives regulation may be a fairly complicated issue, but the financial industry is not well liked among Democratic primary voters these days. It would've been pretty easy for Halter to attack an unhelpful attitude from Lincoln. Lincoln smartly moved left, and best of luck to her in the general election.
Posted by Neil Sinhababu at 6/10/2010 07:37:00 AM