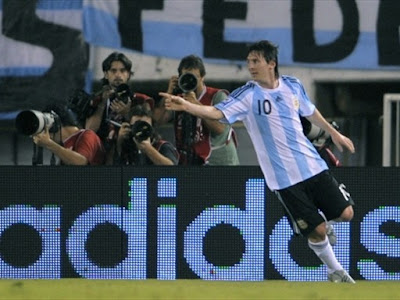 My typical MO during the World Cup is to root against Europe. UEFA views the World Cup as a Europe+Brazil+Argentina championship tournament to which they graciously invite a few of the sport's developing nations, though they'd prefer to just have more European sides. But really, what is the reason that third-tier European nations deserve a trip to the finals over second-tier Asian, South American, North American, and African countries? It's like inviting the 9th-best team in the Big East to take a #12 seed in the NCAA tournament.

I also usually root against Argentina, since they like to pretend that they're a European nation that just happens to be located in South America. But I'm a huge fan of Lionel Messi, pictured above. Argentina's struggles in the qualifying round (thanks, Maradona!) and Cristiano Ronaldo's outstanding play during the club season have led to Messi being eclipsed as a football wunderkind, but I suspect he will outperform expectations.

"But really, what is the reason that second-tier European nations deserve a trip to the finals over second-tier Asian, South American, North American, and African countries? It's like inviting the 9th-best team in the Big East to take a #12 seed in the NCAA tournament."

You really don't think Portugal (amongst last teams to qualify from Europe) should qualify and not Bahrain (loser of Asia-Oceania playoff)?

Okay, Asia/Oceania is a little weak. But I think Costa Rica (CONCACAF playoff loser) probably deserves a finals berth more than Cristiano and the Ronaldettes or French Handball team. Likewise I bet the last team out in CONMEBOL would probably be a fine choice. Africa is harder to judge; Algeria is weak but I don't know of they qualified ahead of a team generally thought of as superior.

Algeria qualified over Egypt, who then got revenge by destroying them 4-0 in the Africa cup finals. Egypt is a better team, but just had trouble qualifying.