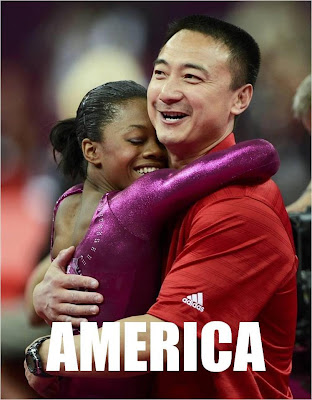 I've seen this picture being posted on Facebook, and it has some mild personal relevance to things that happened in my family.  Liang Chow took a job as a gymnastics coach at the University of Iowa in 1990, and became a US citizen twelve years later.  My dad came to the University of Iowa in the 1970s to do a Ph.D in chemistry, brought my mom along, and now both of them are US citizens.

Our immigration system is set up in a way that lets us legally get Liang Chow and my parents into the country -- he's a high-profile athlete and coach, and my dad had a scholarship.  But there's basically no legal path into the country for lots of poor hard-working folks whose talents we could really use.  They aren't going to take glamorous jobs in Olympic gymnastics that give rise to inspirational photos -- they're just going to pick fruit, wash your dishes at the restaurant, and send some money home so their kids will have enough to eat when things get tough.  But their talents may be complementary to those of native-born Americans just as the talents of the two people in the picture are.  If you're able to pick more fruit and wash more dishes, you can start more restaurants and that means hiring more waiters. That's labor market complementarity, and it's a good thing for native-born workers as well as the incoming immigrants.
Posted by Neil Sinhababu at 8/04/2012 04:25:00 AM

Unspoken conclusion: there should be a path to citizenship for our undocumented underclass.

Yes! And thanks for teaching me some things that went into the writing of this post.

I think that more liberal immigration laws would be a good thing on balance for a variety of reasons, but this post seems to assume that "native born" workers are high skill / high wage workers who only interact with low wage workers by (a) managing them or (b) consuming their goods and services. This is probably a good description of your readership, but it is exactly representative of the US as a whole which also contains a lot of low wage / low skill native born workers. More low wage immigration is rather a mixed bag for the latter group. So while I think that I agree on policy (certainly it is better for almost everyone to have legal rather than illegal immigration), the tone of this post bothers me a bit.

One of the nice things about the dishwashers / waiters example is that it shows how you don't even need the complementarity to involve a big difference in skills acquired through formal training.

But dish washers are likely to aspire to be waiters. And some of them, in fact, will make good waiters once they have gotten a toe hold in the restaurant business. Moreover, having a lot more people looking for jobs on the low end of the labor market could depress wages across the board, at least somewhat, since waiter wages are in part determined by what options would be waiters have in other sectors of the economy. So it is a complicated emperical question whether having lots more potential dish washers around is going to increase or decrease the wages of native born waiters.

I'm all for an immigration policy that's much more open to persons with little in the way of specific skills. But I don't buy the notion that such a policy would be an unadulterated good for everyone.

There are a lot of jobs that a high-school graduate used to be able to get that paid more than minimum wage, that you overwhelmingly see done by Hispanics these days. People who install roofs, gutters, carpet, drywall - a lot of tasks whose main requirement is to have a middlin' amount of strength, a few brain cells to rub together, and a willingness to show up on time, work hard, and pay attention to the details involved in that particular job.

Given the way the employment-population ratio for men in their prime working years has been behaving over the past few decades, you can't convince me that there haven't been people pushed out of work altogether by this sort of thing, and that the equivalent or better jobs have, for many of them, been an illusion.