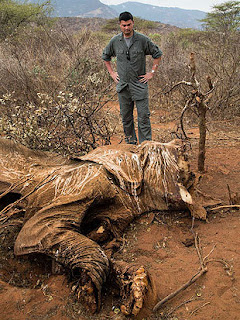 Dan Devine at Ball Don't Lie informs us that Yao Ming is filming an anti-poaching documentary in Kenya.  As traditional Chinese medicine puts great value on ground-up endangered animal parts, speaking to his countrymen could do a lot of good to save species from poaching.  A lot of the medical ideas involved aren't based on any real evidence -- just on the feeling that parts of awesome creatures could do awesome things for you.  It seems like the kind of situation where having an admired celebrity discredit the practice could get people not to do it.

The gruesome image at right has Yao Ming standing over the body of an elephant poached for tusks.  More pleasant is his comment on rhinos:


These are immense and powerful creatures. As one of them pushes me, I'm reminded of the immense pressure I used to feel when I had to guard Shaquille O'Neal. You knew that pressure while guarding Shaq, and you know it when a rhino leans on you.

It seems like the kind of situation where having an admired celebrity discredit the practice could get people not to do it.