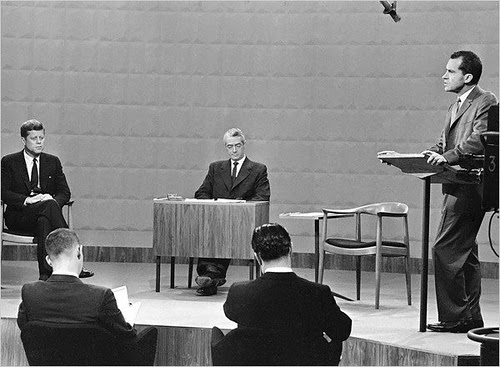 It may be the case that my change in news consumption habits is the real culprit here, But the run-up to this year's debates seems especially content-free. We've been treated to hype from the Romney campaign about zingers and their desires to reset the state of the race, and ... that's about it. In large part this is because the Romney campaign's strategy so far has been to run the campaign as a content-free political science experiment, intent on proving that a challenging candidate doesn't need to offer anything and can instead rely on a weak economy to unseat the cinumbent. Of course, today the economy is slightly on the mend and doing fairly well in swing states.

Nate Silver points out that the first debate typically improves the standing of the challenging party in the polls. This makes sense, since the electorate has generally seen & heard more about what the incumbent has done and will do, and Presidential candidates are generally convincing people. So we will probably see some tightening in the polls, both nationally and in swing states. At the moment, Obama is in a strong position, but Silver's odds give the Romney campaign a roughly one-in-five or one-in-six chance of changing the dynamics of the election enough to win. That probably means pushing bringing Ohio (and possibly Wisconsin, but let's not get too greedy) back into competitive territory, while also pushing Nevada, Iowa, and Colorado into 50-50 territory. Considering that all three of those states have given a Obama a persistent edge, Mitt Romney has his work cut out for him.
Posted by Nick Beaudrot at 10/03/2012 10:28:00 AM