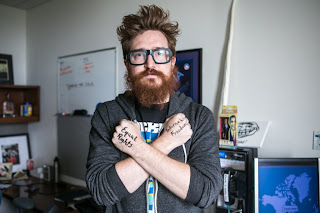 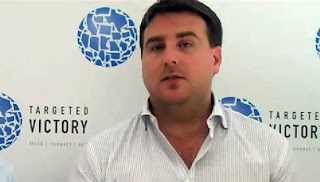 It's often inadvisable to make judgments about individuals on the basis of personal appearance. But sometimes personal appearance is a choice, or the result of choices, and these choices reveal significant things about people. On this note, I wanted to share pictures of 2012 Obama campaign CTO Harper Reed, who had previously worked at Threadless, and 2012 Romney digital director Zac Moffatt, from consulting firm Targeted Victory. Even without the logo behind Moffatt, it isn't hard to tell who is who.

I've said to people that the Romney campaign's difficulty with digital stuff was a result of bad Republican views on gay marriage. To set up your internet stuff properly, you need highly motivated young people. That's a solidly Democratic demographic these days, in part because of the parties' views on social issues. As long as Republicans are doing poorly with the young, they're not going to get enough of the Harper Reeds of the world to volunteer or work cheaply for them, and their stuff won't work as well.

For one, both the size of the technological gap and the relevance is overstated. Whenever people discuss a technique or tool or technology and how important it is to be ahead of the other guy in it, consider how much their liveliehood is based on you thinking it important (or even just their ego). In particular “who is ahead with technology” seems to vary based on “who won most recently”. In 2005 the liberal fundraisers were yelling about how they need more money to compete with Republicans corporate funded databases.

It is true that the Romney ground game overall was very weak, and I think this was because of a real laziness and arrogance on their part. I don’t think it was particularly weak on technology though.

Lastly, your post seems to glorify the Democratic tendency to treat their political labor as not worth paying. Far too many liberals think that because their political workers believe in the cause, they don’t need to earn a living wage. Well, I think exploitation of labor is bad whenever I see it, even if I agree with the cause.

Regarding the tech gap, I'm thinking mostly about all that reporting about Orca and how it failed the Romney campaign on election day. It seemed that there were some serious problems with the election-day GOTV infrastructure.

I'm just making the purely descriptive point that people are more willing to work for causes they believe in, and you'll have an advantage if the pool of labor you need believes in your cause.

BTW, the British Conservatives seem to be having similar problems. All their voter contact stuff is handled by a database called Merlin that was offline for an election a few months ago because the company hosting it went bust. Reading the blog of an activist talking about the problems they had in the local elections a couple of weeks ago, it sounds like it's _still_ down, months later. Conservatives seem to be real suckers for IT grifters.

This is interesting! I enjoyed reading your great post.Thanks for the valuable information and insights you have shared here.youtube Views

This is fascinating! I delighted in perusing your incredible post.thanks for the significant data and bits of knowledge you have imparted here ashleyofmanchester