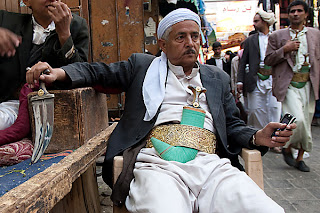 I was looking over Tyler Cowen's post about his trip to Yemen back in 1996, and it brought home to me how much foreign policy debates about other countries ignore the fact that real people with real lives live there. When people talking about foreign policy discuss countries like Yemen in the light of how to stop the pants bomber, everything gets flattened out into abstractions that keep you from fully appreciating the humanity of the resident population. If you're going to make your foreign policy decisions in a non-evil way, it's important to keep their humanity in mind.

Apparently the capital of Yemen is a very old-fashioned place with ancient architecture, spicy food, people getting high on qat, water conservation problems, dudes carrying those wide curvy daggers in their belts, and ladies who are staring up foreign men from behind their veils. Overall it sounds pretty weird, as Cowen says, but even the residents of a weird place seem more human when you describe their everyday lives than they do in foreign policy abstraction talk.
Posted by Neil Sinhababu at 1/06/2010 11:41:00 PM

Apparently the capital of Yemen is a very old-fashioned place with ancient architecture, spicy food, people getting high on qat, water conservation problems, dudes carrying those wide curvy daggers in their belts, and ladies who are staring up foreign men from behind their veils.

The first three things on that list make me think, "Wow, that's a place I'd like to visit." The fourth and sixth, not so much. Wide curvy daggers, I can take or leave, though I understand the "best" ones have handles made of poached rhino horn.

Those houses look all gingerbread to me... I can't believe there's so many of them.

I appreciated this post for using the all important scrabble qord "qat."