Even Nixon Can't Take Us To China 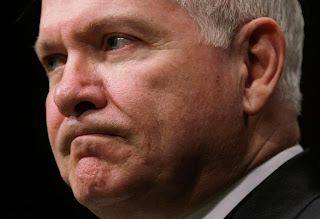 To follow up on Neil's post about Colin Powell's support for defense budget cuts, it's worth pointing out that House Republicans will try their mightiest to force the Pentagon to engage in some deficit spending to buy a bunch of equipment that it doesn't need. To recap, one of the many benefits of retaining George W. Bush's secretary of defense was his ability to get the top Pentagon brass to swallow some "tough" procurement reductions that actually had close to zero impact on the country's warfighting capabilities but are "tough" because Congress has never met a defense project it didn't want to fund. This was all fine and dandy as long as Democrats controlled Congress, but now Republicans, whose districts employ a larger share of defense contractors, are in power, the game may be up. It's going to take yeoman's work from Gates, his replacement, and top admirals and generals to hold the line here.

My guess is that the next Defense Secretary will be unable to fend off this Congress or the next, but perhaps I will be pleasantly surprised.
Posted by Nick Beaudrot at 1/25/2011 11:37:00 AM