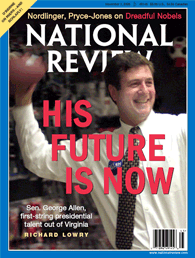 The last fifty years haven't been very good for racism. We've gone from the segregated South to a black president, and people have come to agree that racism is a bad thing. But if you're looking for someone who's done all he can to keep the fire of racism alive, George Allen is your man.

It's sad but understandable how somebody who grows up in a deeply racist culture can come to have racist sentiments. What's amazing about Allen is that he absorbed and fetishized the symbols of racial prejudice despite having every opportunity not to. As a high school kid in California, he posed for his yearbook photo with a Confederate flag lapel pin. His law office included not only Confederate flags, but a noose hung from a tree.

The stuff from college is really kind of bonkers:

"Allen said he came to Virginia because he wanted to play football in a place where 'blacks knew their place,'" said Dr. Ken Shelton, a white radiologist in North Carolina who played tight end for the University of Virginia football team when Allen was quarterback. "He used the N-word on a regular basis back then."

A second white teammate, who spoke on the condition of anonymity because he feared retribution from the Allen campaign, separately claimed that Allen used the word "nigger" to describe blacks. "It was so common with George when he was among his white friends. This is the terminology he used," the teammate said.

A third white teammate contacted separately, who also spoke on condition of anonymity out of fear of being attacked by the Virginia senator, said he too remembers Allen using the word "nigger," though he said he could not recall a specific conversation in which Allen used the term. "My impression of him was that he was a racist," the third teammate said.

Shelton also told Salon that the future senator gave him the nickname "Wizard," because he shared a last name with Robert Shelton, who served in the 1960s as the imperial wizard of the United Klans of America, a group affiliated with the Ku Klux Klan.

Dude! You gave your buddy the nickname "Wizard" because he shares a last name with a Klan imperial wizard! How deep into racism do you have to be in order think that might be a cool thing to do?

The Macaca thing was in some ways the most spectacular moment. For those who may not have been in the game at the time, here's the summary and the video:

On August 11, 2006, at a campaign stop in Breaks, Virginia, near the Kentucky border, Allen twice used the word macaca to refer to S.R. Sidarth, an Indian-American, who was filming the event as a "tracker" for the opposing Webb campaign. Allen apologized and later said that he did not know the meaning of the word. In 2008, The Washington Post speculated that, were it not for this double utterance, Allen would have been a strong candidate for the 2008 GOP presidential nomination. Macaca is a pejorative epithet used by francophone colonialists in Central Africa's Belgian Congo for the native population.

And that's why George Allen is such a great racist. He isn't just content with ways of being racist that are obvious or close at hand. He'll reach across the world to find racist expressions from francophone colonialists in the goddamn Belgian Congo and bring them into American politics. He can teach racists in America amazing new ways to be racist that they had never thought of before.

Back in about 2005, Allen was a leading candidate for the Republican presidential nomination. But the disastrous Senate campaign in which he lost his seat to Jim Webb removed him from contention. Now Allen has decided to run for his old seat again. I'm kind of nervous, because I don't know if Webb is running for re-election. But Jamelle Bouie offers optimism:

It's still too early to say, but odds are very good that Allen will face an electorate that looks like the one in 2008, where blacks, Latinos, and younger whites were nearly half of all voters. If Allen can't improve on McCain's performance, or if the Democratic nominee matches Obama's total, then Democrats hold the seat without much problem. Again, conditions can change dramatically over two years, but with any luck, this will be Allen's last gasp for political relevance.