Elections In Singapore: May 7! 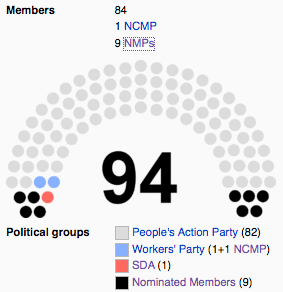 It's an exciting time in Singapore, where we're gearing up for our most-contested election in many years on May 7. As the chart at right shows, that's not saying a whole lot -- the ruling People's Action Party (PAP) controls 82 of the 84 elected seats in Parliament. Last election, they won 66.6% of the vote, with three opposition parties splitting the rest. The 66.6% figure understates how well they did, as the opposition didn't even contest a large number of the seats, and Singapore doesn't even go through the motions of having elections when there's only one candidate on the ballot.

There are a variety of reasons for PAP dominance. The Singaporean economy has been doing beautifully over the last several decades, averaging 8% annual growth from 1960 to 1999 even after adjusting for inflation. The average Singaporean makes 82% as much as the average American (up from 40% in 1980). Lots of people are content with the progress, and are happy to keep supporting the generally competent technocrats who have delivered these results.

Of course, power can be used to ensure that you'll be in power in the future. The PAP has thrown its weight around in these ways. Among the more benevolent-looking ways in which it's given itself some impressive electoral advantages is the GRC system. Only 9 of the 82 elected MP's are in single-member constituencies. The rest are voted in as a slate of 3 to 6 candidates in "Group Representation Constituencies." To make sure that there are ethnic minorities in Parliament, there's a quota system where a party has to include a certain number of minority members in the slate it puts on the ballot for the GRC. (Singapore is mostly Chinese, but there are large Malay and Indian minorities.) A large and well-organized party like the PAP is always able to make sure they've got enough minorities of the right kind, but a small opposition party might have trouble finding a proper mix of credible candidates.

Among the biggest problems opposition parties face, however, is just the difficulty of operating in a system where historical PAP domination gives everybody the expectation that they'll be in trouble if they take sides against the ruling party. To tell you a story -- some of my students told me that they had a friend in high school who was into opposition politics, and they were all worried about him and warning him that this would keep him from getting scholarships. I have no idea whether this guy really got in any trouble or anything, but the fact that people are worried about stuff like that makes it hard for an opposition party to get a group of talented and ambitious people together to stand for election against the powers that be. The government controls a lot of the Singaporean economy, and people don't want to get on the wrong side of it.

This year's election promises to be more eventful than most. The opposition parties got together to coordinate and avoid three-way fights where they'd be splitting the anti-PAP vote (do this, Canadian lefties) and it looks like 82 out of 87 seats will be contested. I haven't been in town for the other elections, but my colleagues tell me that there's a lot more excitement around this election than there has been in the past. It's unthinkable that the opposition would actually win control of Parliament, given what they're starting from, but just winning a few more seats would be counted as a success. If they got, say, 20% of Parliament, people would be extremely impressed.

Two of the opposition parties (which are somewhat representative of the place as a whole) are the Workers' Party and the Singapore Democratic Party. I've linked their manifestos, which have pretty clear descriptions of their major proposals, and which agree with each other significantly. (The SDP has a better website, so I'll be linking to that one below.) The PAP's manifesto is here [pdf], and as befits a status quo-oriented ruling party it's more about small-bore improvements to infrastructure than about dramatic new policy initiatives.

A lot of opposition proposals look pretty good. For example, the reduction in national service. Singapore currently requires all of its young men to spend 2 years in the armed services, and then to report regularly for reservist training until they're 40. This just seems to me like a terrible waste of talent, especially as Singapore (unlike Israel and South Korea, which have similar policies) isn't in a state of conflict with its neighbors. There's always a risk that instability in Malaysia could lead to something bad happening, but even then, it's not clear that a huge number of ordinary Singaporeans is the kind of army you want. Better to let the young folks go out into the economy, make money, contribute to tax revenue, and then hire a professional military that uses high-tech weaponry. Singapore is buying the technology, but they haven't yet done the thing the SDP proposes -- cutting national service duties from 2 years to 1. I hope that the government will eventually do that and more.

There are a lot of economic proposals that I think pretty highly of too -- minimum wage laws and cuts in the regressive General Sales Tax, and cuts in housing prices. (80% of the population lives in government-owned housing developments called HDBs.) The big thing that I worry about with the opposition is its anti-immigrant sentiment, which now takes the shape of a Singaporeans First policy which would create bureaucratic barriers to keep businesses from hiring foreign workers. Partly, this is my self-interest speaking, but since I'm an opponent of anti-immigrant measures in the US too, I don't feel that I'm doing anything hypocritical.

I'd say more nice things about the opposition's support for civil liberties measures (which is exactly what you'd expect in a one-party state like Singapore) but the department secretary is knocking on my door and telling me I've got to go administer an exam now. More later...
Posted by Neil Sinhababu at 5/05/2011 12:14:00 AM