Osama Is Gone, Competence Has Returned

This is a strange emotion to feel at someone's death, but my overriding feeling about killing Osama Bin Laden is satisfaction at the return of operational competence to US foreign policy. I can't feel any sadness for Osama, especially when so many good people throughout the world die needless and tragic deaths, and when he planned and celebrated thousands of these deaths.

I'm really struck by the contrast with the clown show that was Bush administration foreign policy. We failed to get Osama when we had him pinned down at Tora Bora, and then we started a costly and bloody war with an irrelevant country. Years passed. Now, after 28 months of Obama as president, US intelligence sniffs out the cold trail of Osama Bin Laden and a Navy SEAL team kills him with no US casualties. I've created an image to represent one aspect of this situation visually: 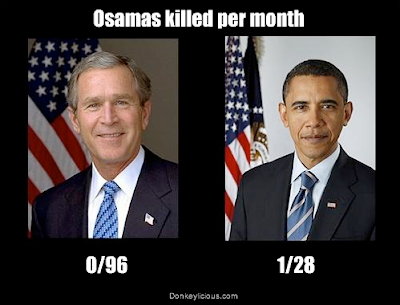 A lot of what matters for competent management of foreign policy, especially as far as intelligence issues are concerned, is just setting the right priorities from the top and caring about getting things right. If you let it be known to your intelligence services that you really just want to go to war and you're looking for some kind of justifying evidence, they're going to serve up evidence that supports your case whether it's misleading or false. But if you let them know that you really want accurate information that will help you make the right decision on some important issue, you have a decent chance of getting it.

Of course, what we're all hoping for now is a break with disastrous Bush administration strategies to go along with the increase in competence. Like everybody is saying, this would be a great time to get out of Afghanistan. Bernstein pointed me to this article in Slate, which suggests that Iraq withdrawal is moving forward pretty well, but it needs to be accelerated, and removing the last group of troops may require some pushing. Now and in the long run, I hope having Osama's head on their pike will help Democrats be a bit more assertive about ending pointless military endeavors.
Posted by Neil Sinhababu at 5/02/2011 01:52:00 AM

I can't feel any sadness for Osama

Was that really in question?

Oh, it's just that I've seen a lot of pacifist facebook friends and such being ambivalent about killing somebody.

I've seen that too Neil.

I love that graphic. Have you seen the new bumpersticker? It's dark blue background, a modified Obama campaign logo and the words: We Got Him.

A double meaning no doubt. SMILE