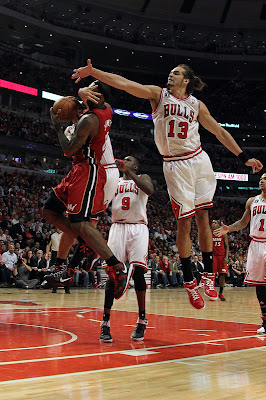 It looks like an exciting NBA finals.
I don't know whom to root for. I'm sympathetic to the least-liked figures on both teams. I've been rooting for Miami throughout the playoffs, just because I feel that the anti-LeBron rage got excessive. The guy mishandled the PR for a smart career decision in a way that hurt people's feelings. It's not like he's Ben Roethlisberger. On the other side, I've always liked Mark Cuban. Sure, he's kind of a jackass, but it all fits with being a fan who totally loves his team. And it'd be nice to see (non-disliked) Dirk Nowitzki win one after so many years of trying.
The Conference finals really brought out the common flaw of the losing point guards: taking too many shots. Yglesian skepticism about Derrick Rose's shooting found some confirmation as his three awful shooting performances doomed the Bulls. Over games 2, 4, and 5 he shot 24 for 79, always putting up more shots than points. His other two games weren't great either. I know that the Bulls are a good rebounding team, and scoring on putbacks from Rose misses is part of their game, but this really got out of control. Meanwhile, Russell Westbrook was going 36 for 100 out West. I know it's hard to see where James Harden is behind the beard, but he's a pretty efficient scorer and when opposing defenses are focusing on Kevin Durant, he's a better option than trying to do it yourself. 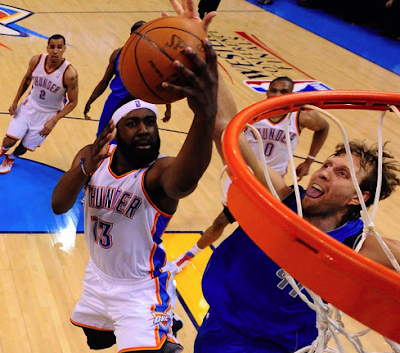 I don't think Rose was the best choice
for the MVP award, but one of the things that complicated the issue was that he got better this year while all the usual MVP candidates got statistically a bit worse. Kobe, Durant, and LeBron all had slightly weaker scoring years than previously. Really, if you asked me who the most valuable player in the NBA was this year, I'd say LeBron, but of course they weren't going to give him the award again after he left Cleveland and his numbers turned slightly downward. Giving the award to Dwight Howard would've been plausible as he got 23 points and 14 rebounds per game while playing good defense. But instead they decided to give it to the most exciting player on the winningest team, which is kind of how MVP awards go.
Posted by Neil Sinhababu at 5/26/2011 10:56:00 PM