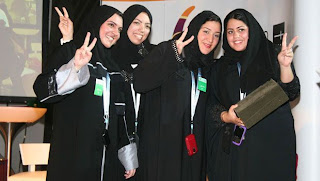 It's a happy day for humans, as Saudi King Abdullah has granted women the right to run for office and vote in the 2015 local elections. I don't know exactly how much power over the political system voting gives people in Saudi Arabia -- obviously when a King is just going ahead and doing this, you don't have a full democracy -- but he deserves praise for taking this step.
It's always struck me as kind of crazy that a hundred years ago, women couldn't vote in America. Some bad policies are foolish blunders or miscalculations, but others seem to come out of an utterly foreign way of experiencing the world. Denying women the vote is a thing of the latter kind. The way men felt about the women they interacted with on a day-to-day basis must've been really bizarre for denying them the vote to feel like it made any sense.
Posted by Neil Sinhababu at 9/25/2011 08:01:00 AM