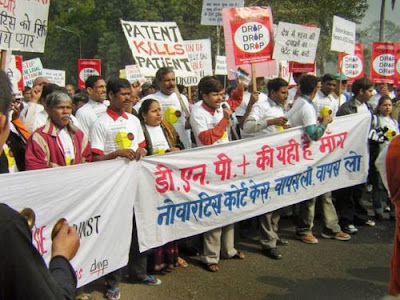 That appears to depend on which way the Indian Supreme Court rules. Novartis has taken the Indian government to court about the generic production of a drug that has efficacy against AIDS and cancer. It appears that they tweaked an old drug so that 30% more of it would get into the bloodstream, and want their old patent evergreened. The Indian patent office ruled that the new version didn't have enough increased efficacy, and refused to evergreen the old patent. So Novartis sued.
This is a pretty tremendous issue for people with AIDS in the Third World. The generic version of the drug costs $170 per month, while Novartis' branded version costs about $2500 per month. Indian generic manufacturers are the primary source of the drugs for many poor countries.

“About 80 per cent of anti-AIDS drugs and 92 per cent of drugs to treat children with AIDS across the developing world comes from the Indian generic manufacturers,” says Leena Menghaney of Medecins Sans Frontieres (translated from French as Doctors Without Borders). “India is literally the lifeline of patients in the developing world, especially in the poorest parts of Africa…If Sec. 3(d) is overturned, it means any meaningful effort to make these vital medicines available will be put in jeopardy.”

As far as I can tell, there's no need for-profit pharmaceutical companies. A lot of what they do starts from publicly available basic research done by academics and government scientists. They then carry the ball across the goal line and get patents that allow them to make tremendous money. Instead, we could turn research and development over to academic researchers funded by government grants, and set up a Fed-like body of scientists that would pick the best projects and farm clinical trials out to contract labs. The creative work can be done by smart people seeking glory and tenure, and the grunt work can be contracted out. The resulting knowledge would be open to all, and generic manufacturers could crank out cheap pills for everyone in the world.
Posted by Neil Sinhababu at 9/17/2011 05:08:00 PM

I agree, but it doesn't really help your position to illustrate your post with a cartoon from a lunatic fringe anti-medicine site like counterthink. (sample claim: free cancer screenings are a plot to give people cancer to make money for Big Chemo http://www.counterthink.com/The_truth_about_chemotherapy.asp)

I strongly disagree with this statement:

"As far as I can tell, there's no need for-profit pharmaceutical companies. A lot of what they do starts from publicly available basic research done by academics and government scientists. They then carry the ball across the goal line and get patents that allow them to make tremendous money."

The amount of effort required to convert an academic finding (assuming it is reproducible, recent research shows an uncomfortably large portion of academic research isn't) to a marketable product is at least an order of magnitude larger than the amount of effort put into discovering the original finding in the first place. There is simply no way that academic labs as they are currently structured could develop pharmaceuticals the way that the big companies do. The infrastructure is simply not in place. And I'm not entirely convinced that even if you committed the public funds to put that infrastructure in place (and by the way, good luck with that) that this would guarantee any kind of return on your investment. Drug discovery is just turning out to be much harder than anyone imagined. It really appears that the low hanging fruit has largely been picked over, and what is left is requiring more and more dollars to be spent on fewer and fewer results. Which is why companies like Novartis have to try to protect their IP for as long as possible, because the pipelines are drying up faster than they can be replenished. And Novartis isn't even one of the companies that are in real trouble. Take a look at Eli Lilly and AstraZeneca. When their current drugs go off patent in the next 2 to 5 years, there are going to be many more scientists looking for work I fear (see Derek Lowe for more, he's one of the most knowledgeable bloggers about the pharmaceutical industry as far as I'm concerned http://pipeline.corante.com/archives/2011/06/20/not_looking_so_good_at_eli_lilly_or_astrazeneca.php)

I didn't know anything about the site, JMGK, but I'll keep that in mind... going to look for a better illustration too...

JR, I agree that currently structured academic labs couldn't do this. As you suggest, I'm talking about building up a complete new alternative infrastructure that would cost at least tens of billions. And I'll concede on the political unworkability of building up the alternative infrastructure. But that's not really a problem for a debate of this sort, as the political side of generating the IP changes I'm talking about here is itself in magic wand territory. "If you can make pharmaceutical patents cease to exist, you can set up these gigantic academic / govt labs" is true at least as a material conditional, and probably as a counterfactual conditional, because the world where you could do the former part is weird and awesome enough.

But given all that, I don't see that you've got any argument against the proposal. If the low hanging fruit has been picked (as I agree it has) that's at least as much a problem for the current system as for a hypothetical future system. You're describing really deep problems for the system as it stands, and I don't know why the alternative system I've suggested would do any worse with them.

My problem was not so much with the proposal that government labs replace private for-profit pharmaceutical companies, but rather with the assertion that all that they do is "carry the ball across the goal line." I am no fan of the pharmaceutical industry, but they do make enormous intellectual contributions to the drugs they produce.

Yes, I do admit that I am deeply pessimistic about the prospects for the current system as well. I guess the difference in opinion comes about by the fact that I don't believe that simply eliminating pharma patents would bestow academic labs the ability to replace their R&D efforts.