The Bernsteinian Argument For Gingrich 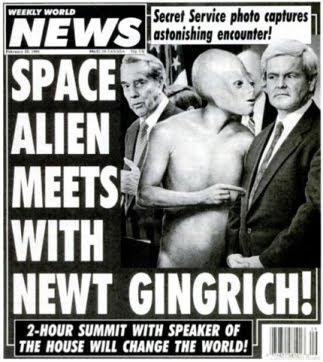 Jonathan and Nick seem to be pretty sure that the Newt surge won't win him the nomination, while I take the recent polling at face value -- Newt leads Mitt 31-27 in NH, 38-15 in SC, and 29-13 or 28-12 in Iowa. I get the objections to early polling, but now we're five weeks from the Iowa caucuses and the numbers matter. Mitt needs some way to make up ground fast. Now Ann Selzer, who knows Iowa better than any other human, is saying that Newt would be the major beneficiary of a Herman Cain flameout.
Jonathan writes that "party actors have been very reluctant to line up for any of the surge candidates other than (while he was hot) Rick Perry." Here I want to recall something Jonathan was saying a lot last year. The people who really control public opinion and deliver primary votes in the GOP aren't elected officials. They're people who are basically paid like entertainers -- Rush Limbaugh and Bill O'Reilly. And while it's deeply in the interests of elected officials and staffers that their party win elections, since their career prospects depend on that, entertainers don't have such a strong reason to care. They can happily get behind the unelectable guy who says more exciting things.
So if Gingrich doesn't win big endorsements of any kind from GOP officeholders, who cares? Those aren't the people who deliver votes, anyway. And eventually, it all comes down to votes. Conservative media figures are the relevant party actors here, not New Hampshire congresspeople. They don't have an especially strong reason to give Romney the favorable treatment he'll need to catch up, and they could easily turn Newt's book publicity tour into a presidential nomination.
[Update] Thanks to Andrew Sullivan for the link! I didn't link properly to Jonathan's comments about the entertainers in the GOP media when I first put up this post. For his points on that (which have shaped my understanding of the contemporary GOP) you can look at posts like this: "what Rush and company talk about -- which is driven by what drives ratings and sells books -- then becomes the only thing that conservatives talk about." There's also a great one I can't find about how we haven't ever seen a party like the modern GOP before, where a lot power is in the entertainers' hands rather than the politicians, and how that might result in the GOP doing weird and unprecedented things.
Posted by Neil Sinhababu at 11/29/2011 10:16:00 AM

They may have hated McCain, but they hated everybody else about as much. Between pro-choice Giuliani, tax-raising Huckabee, formerly left-wing Romney, there was nowhere to go.

Why is Newt Gingrich naked, and why are the two space aliens wearing a suit and tie? I supposed one would have to buy a copy of the newspaper to find out...