Eye Of Newt And Toe Of Frog 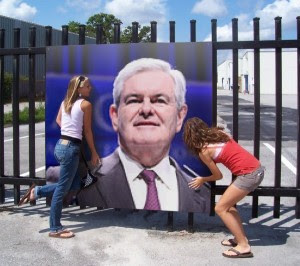 This kind of commentary showing Newt Gingrich rising as the final anti-Romney strikes me as plausible.
There's a significant portion of the GOP base that will support someone regardless of whether they're in any usual sense a plausible major-party nominee. These are the people who were telling pollsters they wanted to vote for Herman Cain and Donald Trump. I'm thinking that these people can be easily swayed by media forces, whether those are within conservative media proper (Limbaugh / Hannity / O'Reilly) or traditional media that doesn't do anything immediate to alienate conservatives.
If you were in the market for this kind of candidate, I think you might be up for some Gingrich once Cain went down. Gingrich's ideas are in fact total poorly thought out nonsense, but he's got pseudo-ideas that appeal to people who vote in a Republican primary. And at the same time, he has an impressive formal qualification in having been Speaker of the House back in the 1990s. I suppose this might be the kind of thing that'd get GOP elites who may not have been up for some Cain to believe in him. In a Romney-Gingrich primary, a lot of GOP media figures would take the Gingrich side. He's got nice crazy conservative views that they won't be dissatisfied with. Given the amount of time these weird surges of interest in some flaky candidate last, we've got enough time for Cain to die down and the final star to rise before Iowa. Newt sounds as good as anybody.
And as a general election opponent who'll run a terrible campaign and alienate swing voters, he sounds okay to me too. I don't know whether he'd beat Romney, and frankly I don't know whether to prefer the relative safety of Mitt where you might easily lose the election but he's not crazy, or the Gingrich deal where you're very likely to beat him but if Europe crashes and takes our economy down with it maybe people vote for insane Newt.
Posted by Neil Sinhababu at 11/11/2011 09:57:00 PM