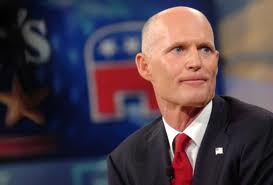 I'm in Florida right now, where I've talked with lots of people at local universities about Governor Rick Scott's crusade against humanities departments (apparently he especially doesn't like anthropology).
It's kind of insane that this guy has any kind of political career, let alone being the governor of Florida. The health care company he ran had to pay out the biggest fraud settlement in US history -- $600 million -- after committing 14 felonies. I'd think that sort of thing would disqualify you from holding elected office. As a grad student at FSU put it, "We elected a supervillain for governor."
Posted by Neil Sinhababu at 11/05/2011 06:10:00 PM