Presidential Persuasion: Not Usually A Thing

I'm liking Ezra Klein's piece in the New Yorker on how presidential rhetoric only convinces the president's party, and anti-convinces the other party. From the way Ezra describes the academic debates in political science, it looks like the people who focused on the power of presidential speechmaking were paying undue attention to factors whose salience was amplified by heavy media coverage. The debate has turned towards a focus on less-salient but more important facts about partisan incentives.
While agreeing with the general drift of the research, I wonder how it addresses the time between 9/11 and the onset of the Iraq War. A large minority of House Democrats and half the Democrats in the Senate supported Bush's Iraq War. I don't think it's straightforwardly that Bush persuaded them, but his administration was very happy to promote a way of understanding the conflict that led to major Democratic support for his disastrous proposal. Perhaps part of the problem is that partisan forces in our system were dulled by the rally-round-the-flag effect of 9/11, with Bush having the highest Gallup rating ever for a sitting President. And part of it may be that House Democratic leader Dick Gephardt was hoping to advance his Presidential campaign by supporting what he thought would be a popular war, so he co-authored the Iraq War resolution with Joe Lieberman rather than following the partisan incentives to oppose Bush.
I haven't done much Nancy Pelosi blogging lately, so let me share this anecdote from the article:

Karl Rove, President Bush’s deputy chief of staff, recalls discussing the Social Security privatization plan with a sympathetic Democrat on the House Ways and Means Committee. He says that the representative told him, “You wouldn’t get everything you want and I wouldn’t get everything I want, but we could solve the problem. But I can’t do it because my leadership won’t let me.” Rove says, “It was less about Social Security than it was about George W. Bush.” 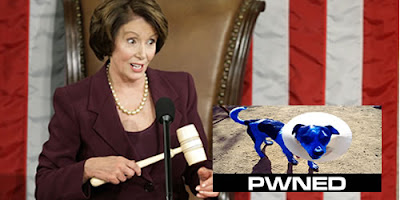 Without the work of the Democratic leadership, which Pelosi took over just before Bush started pushing Social Security privatization, these "sympathetic Democrats" and their sympathy for the devil would've sent American retirement security to hell. That's where they sent Iraq when Gephardt was House Democratic leader. Our political system is a two-party system, and Pelositheism is a Manichean faith. I'm a believer.
Posted by Neil Sinhababu at 3/12/2012 06:43:00 AM