How Maureen Dowd Got Her Groove Back 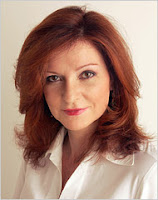 I didn't read Maureen Dowd for the longest time, because of articles like this in 2004 (it's all about Wes Clark's clothes, and begins 'Can we trust a man who muffs his mufti?') But now she's spent five columns criticizing the Catholic Church's response to the child molestation scandal. The seventh is praising nuns while attacking the men in the church hierarchy for their positions on health care reform. None of them criticize the pope for his funny hat.

We're moving away from triviality and towards substance. This is a better use of the most precious op-ed real estate in America, and I hope we'll see more of it from her in the future.
Posted by Neil Sinhababu at 4/12/2010 08:20:00 AM

I saw this, but I quit reading after the line about 'men who wear dresses'

Neil-
I too have been reading Maureen Dowd with interest lately. And I am also glad that something substantive, from someone with a voice that is heard and has experience in the church, is finally being said..