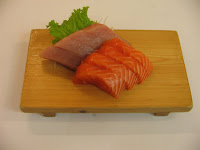 Slacking off at work, I became curious what kind of sushi ex-Russian spy Alexander Litvinenko ordered when he was lethally poisoned with polonium back in 2006. Apparently it was tuna and salmon sashimi. Doing its job, the British tabloid media reveals that it was served by an attractive Polish waitress.