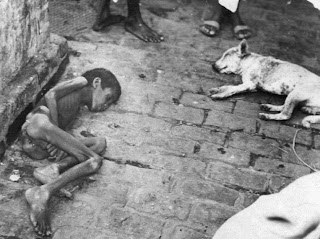 It's good to see balanced portrayals of Winston Churchill start to emerge. This is a man who killed millions of Indian villagers by taking all the grain out of the Bengali countryside in 1943. The crop yield wasn't that bad -- it was better than it had been two years before -- but Churchill took away the grain to fortify Calcutta (which the Japanese army never reached) and feed British troops elsewhere in the world. During much of the famine, Bengal was a net grain exporter.

The death toll is hard to estimate, because they didn't keep good track of population in the countryside. Estimates that I've seen are in the area of 1.5 million to 7 million, with 3 million being about the best we can do to find a unified number. When the Indian viceroy asked him to send grain back into the countryside to deal with the resulting famine, Churchill asked in a telegram why Gandhi hadn't starved to death yet.

After India got its independence in 1947, famines that killed this many people became a thing of the past. As Amartya Sen says, once a country becomes a democracy, it's ruled by leaders whose jobs depend on making sure the voters have enough to eat, and they're going to do whatever they can to make sure people don't starve. Enormous numbers of lives thus depended on Gandhi's struggle to free India from British rule. Meanwhile, Churchill was fantasizing about having Gandhi "bound hand and foot at the gates of Delhi and then trampled on by an enormous elephant with the new Viceroy seated on its back," as Johann Hari's review mentions.

Like Stalin, Churchill was in the right place at the right time to keep a terrible fate from befalling the world. And like Stalin, killing innocent people by the millions didn't bother him very much.
Posted by Neil Sinhababu at 8/16/2010 09:18:00 AM

Perhaps this is too simplistic a view, but I don't find this at all inconsistent with the Churchill I was taught in school: he cared very much about the British people, which didn't include colonized people. You saw the same view of the Irish prior to partition, with Ireland exporting most of its produce to Great Britain even as its residents died by the millions from famine.
It's nexcusable, of course, but not particularly surprising.

Yeah, that sounds right to me.

Thank god the Labour Party, under the leadership of the brilliant Clement Attlee, had the wisdom to run the 1945 elections on the platform on actually enacting the Beveridge Report, thus winning the elections, tossing victorious Winston out on his ass, and being able to end Winston's genocidal colonial policy while maintaining popularity.

Winston would have pursued a horrific course overseas if he had won the 1945 elections.

He was also the architect of the disaster at Gallipoli during World War 1, and responsible for the needless pointless deaths of tens of thousands of Australian, New Zealand, Indian and British troops, as well as a similar or greater number of Turks. No territory was gained or lost. So he didn't mind too much about killing people, even when fighting a pointless war like the Great War, with no fine cause to it at all.
Emma in Sydney

"You saw the same view of the Irish prior to partition, with Ireland exporting most of its produce to Great Britain even as its residents died by the millions from famine."

1. There was a net flow of food into Ireland during the famine (thanks to the poor laws and to Robert Peel importing maize). Ireland exported cash crops, like wheat, but even if these had been stopped, the . See Cormac O'Grada's or Joel Mokyr's work on this.
2. "millions" didn't die in the Irish famine: it was maybe a million or so. About 100,000 died of starvation, somewhat less than a million of disease (mostly typhoid spread through the workhouse system), and one million emigrated.

And yes, Churchill had many fuck-ups to his name: Irish partition, Gallipoli, keeping Britain on the Gold Standard during the 1920s and causing the General Strike. However, you can forgive him a lot of sins for what he did do in WW2. But the British were right to replace him with Atlee when the war was over.

Anonymous, everything said here about Churchill was true and just, but I can't find a way to blame him for Gallipoli other than his being guilty of coming up with a brilliant concept that was handed over to incompetent generals and admirals.

Whether there was a net import or net export of food into Ireland during the famine is still being debated. What's not debated is that large quantities of food were exported and that, for the entire duration of the famine, England refused to pass an export ban. This meant that the food charitably donated to Ireland typically had a self-undermining effect. It caused the price of food to drop in Ireland, encouraging even more exportation.

In any case, nearly 1 million dead and 1 million turned into refugees in a country with a population of about 10 million is pretty horrendous-- we are talking about Great Leap Forward levels of death.