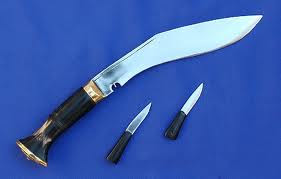 Here's your violent feel-good story of the day. Forty or so Indian bandits are robbing a train, stealing passengers' jewelry, cell phones, and laptops. They decide to do some raping too and start taking a young lady's clothes off. Apparently Bishnu Shrestha, the Gurkha warrior standing by, didn't want to start a bloodbath to prevent robbery, but he wasn't going to allow the raping, so he pulled out his khukuri (pictured at right). In a whirlwind of steel 3 robbers/rapists were killed, 8 were injured, and the other ~29 fled. Not only was the rape prevented but a lot of the possessions were recovered.

Now Bishnu is being rewarded with medals and money and free stuff from the Indian government. I'm kind of digging his martial pride: "I am proud to be able to prove that a Gorkha soldier with a khukuri is really a handful." The Gurkhas have a history of being awesome warriors -- an Indian general once remarked that "If a man says he is not afraid of dying, he is either lying or is a Gurkha."

The practical way to make progress on issues of sexual violence today is more in the direction of "Make sure men regard nonconsensual sex as an abomination" than "Have heroic Gurkhas slice up would-be rapists." But I wouldn't mind if somebody forwarded this story to Ben Roethlisberger before his next night on the town.
Posted by Neil Sinhababu at 2/01/2011 12:16:00 AM