All The Way To Tripoli 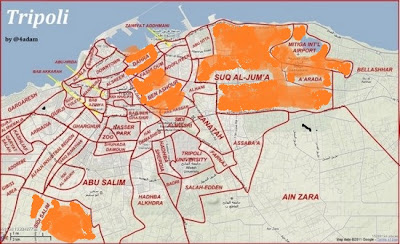 Juan Cole has been optimistic and right on Libya for quite a while now, and it's good to see him still being optimistic. The rebels have fought their way to Tripoli, and apparently underground rebel groups inside the capitol have risen up and taken control of territory in the last few days. At right is the map of districts controlled by rebel forces. I think he made it from this, but my red-green color vision problems don't allow me to see what's going on there.

This is kind of basic, but I'm struck by how different our intervention in Libya is from Afghanistan. In Libya, you can see obvious and measurable progress -- the rebels have slowly but steadily gained territory, defending their capitol, taking the crossroads town, taking the oil towns, and now they're at the capitol. Gadhafi's officials have defected as the rebels won battles. In Afghanistan, everything is murky and there's no visible signs of progress. And that's with 6 months of helping from the air in Libya and nearly 10 years of US ground troops in Afghanistan.

Of course, there's still plenty of challenges ahead in Libya. From deposing Gadhafi to constituting a government to holding fair elections to not falling back into a civil war of some sort, the really difficult parts are yet to come. But so far, so good.
Posted by Neil Sinhababu at 8/21/2011 03:58:00 AM

Bad comparison: Libya and Afghanistan are not remotely similar in regard to military or political circumstances and goals (theirs or ours).

They're similar in one key respect: In both, you only should be there if you're going to accomplish a goal.

The problems with continued involvement in Afghanistan can be understood at this fundamental a level.

The rebels have fought their way to Tripoli

Yeah, but they didn't have to start from the halls of Montezuma!