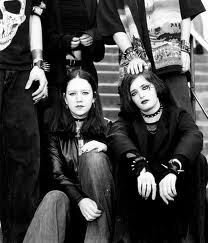 The earliest attestation of this claim comes from the Council of Basel, 1434, during which the Swedish delegation argued with the Spanish about who among them were the true Goths. The Spaniards argued that it was better to be descended from the heroic Visigoths than from stay-at-homers. This cultural movement, which was not restricted to Sweden went by the name Gothicismus or in Swedish Göticism, i.e. Geaticism, as Geat and Goth were considered synonymous back then.

The idea that the Geats were Goths will change the way I read Beowulf.

The fall of the Roman empire seems to have resembled a dysfunctional modern urban scene, with all the Goths and Vandals running around.
Posted by Neil Sinhababu at 8/18/2011 08:15:00 PM