Over ten years ago when I was finishing college, I started a short-lived financial news parody website called Donkeybusiness, now gone from the web. The first article I put up on the site back then has become relevant to global monetary policy today, especially in light of the fourth paragraph, and I thought I'd share it with you.

Attempting to propel the country out of a decade-long economic decline, Japan’s government announced that the national currency would be changed from Yen to Beef. The target date for the switch is New Year’s Day, 2002. 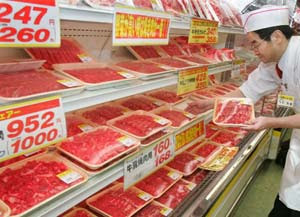 “As our economy recovers, it is important that we support this recovery to the fullest extent possible,” said Finance Minister Kiichi Miyazawa. “A Beef-based economy will hasten its growth.”

“Beef is not only a tasty meat,” said Taichi Sakaiya, Chef of Japan’s Economic Planning Agency. “It will be the secret ingredient of Japan’s future prosperity.”

Masako Shiganaba, head of currency trading at Bank of Tokyo-Mitsubishi, explained the decision. “For many years, Japan has been caught in what economists refer to as a ‘liquidity trap.’ Seeing economic weakness and fearful of weakness to come, Japanese consumers delay purchases, saving their money. Their lack of spending, in turn, prolongs the recession. But unlike other currencies, Beef only lasts a couple of days in the refrigerator or a few months if frozen immediately. So consumers will have to spend it as fast as they can.”

Alexander Kaufman, Global Equity Strategist at Deutsche Bank, applauded the move. “While Western governments use pork to stimulate their economies in times of adversity, Japan uses Beef. It’s an innovative strategy, and I have high hopes for it. In addition, there is now no danger that coins will set off airport metal detectors.”

“If paper currency catches fire, it’s lost,” said Satoru Osako, trader at Commerz Securities. “But if Beef catches fire, you can eat it.”

Others were skeptical. “While other governments work hard to prepare their economies for the 21st century, Japan adopts a medium of exchange straight out of the 21st century BC,” said Annette Walsh, Asian Markets Analyst at Lehman Brothers. “The transition we need to see is from industrial Old Japan to technological New Japan, not back to agricultural Ancient Japan.”

“I worry about the new currency,” said Shimoru Nakayama, strategist at Bank of Yokohama. “Looking at the euro does not make me optimistic about the future of Beef.”

Efforts to ready the economy for the new currency are under way. Vending machines and arcade games are being refitted with new slots and freezer compartments so that they can be changed from coin-operated to Beef-operated. Electronic security measures are being devised to prevent counterfeiters from using beef substitutes.

I like to tell people about this article when I'm explaining the phenomenon of a liquidity trap and why I support for inflationary monetary policy at the present. If you replace your currency with a meat, people have to spend it before it goes bad. So it gets more spending going. Inflation basically makes your currency perishable, like a meat, so it has the same stimulative effect.
Posted by Neil Sinhababu at 9/21/2011 10:35:00 AM

Just want to say that that piece is absolutely brilliant! It's funny, and it insightfully illustrates the underlying point about the usefulness of inflation.