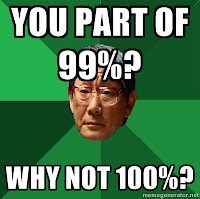 As names for the movement go, I'm a big fan of "99%" and much less a fan of "Occupy." One names the very appealing goals of the movement -- changing public policy so that it benefits the vast majority of Americans and not just the rich. The other names a tactic, which could be good or bad depending on what use it's put to. (I have this weird image of Israeli settlements renaming themselves "Occupy Palestine.")
If you're a middle-of-the-road middle-class person and you hear about the 99% movement, you're likely to think of that movement as being in your interests. After all, you're likely to be aware that you're not part of the richest 1%. However, if you hear about "Occupy" you might be worried that they're going to Occupy your front lawn or something. The only guy who I can see having a negative response to the "99%" name is High Expectations Asian Father, depicted in the graphic.
Posted by Neil Sinhababu at 12/14/2011 10:56:00 AM

It's true! One of those hippies is now occupying my basement (again!)Good point about 99%; I think "Occupy" got started because that was an easy way to explain where they were because they were actually living in the encampments ("He's down at Occupy.") You can't really say someone's at 99%. It's too confusing. Now that it's not about residency, but more of an entity, 99% makes sense. Still doesn't really roll off the tongue, though.