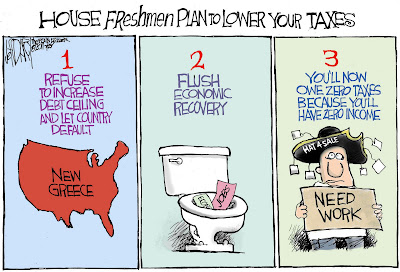 When Democrats displease their party base in negotiations, it's usually because they play things too moderate. It's interesting to see Republicans displease their party base by taking such an extreme negotiating position that the Wall Street Journal wouldn't stand for it and they had to give it up. I've never seen this happen on our side before, but it seems to be what the GOP had to do on the payroll tax cut. I guess the plutocrats want their tax cuts and a working economy so that they can make money.
We're seeing a little bit of positive movement on the economy. Hopefully Europe won't collapse and destroy all that. It's been kind of ridiculous to watch the European Central Bank make such bad monetary policy that the currency they're in charge of may cease to exist, and take the bank with it. Hopefully the new lending they're doing will turn things around.
Posted by Neil Sinhababu at 12/23/2011 12:07:00 AM