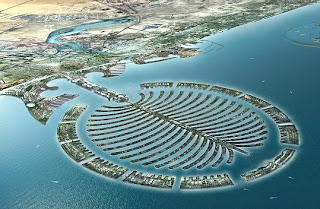 Matt thinks big countries are more likely to do silly national greatness spending on things like the Olympics and the space program, and he sees bad monetary policy in a similar light.  I guess one of my qualms that explanation is that medium-sized and small countries do silly national greatness projects too.  Over in Dubai they're using their money to build all kinds of weird stuff like manmade islands in the shape of palm trees.  And the ultimate badly run small country, North Korea, has four Olympic gold medals so far.  Obviously these are extreme cases, but I really have no idea whether a greater percentage of large country or small country budgets goes to prestige projects.  I suspect that it's about the same, and large country prestige projects just end up being more noticeable because of the greater raw amount of money concentrated in one place, not the percentages of the total budget.

If I had to guess as to what's going on here, I'd point to whether monetary policymakers' interests were aligned with those of most citizens.  In the EU, monetary policy has been heavily German-influenced, so you get the kind of policy Germany wants rather than the kind the rest of Europe needs.  In the US, monetary policy is heavily influenced by the interests of banks and the obscenely rich, so you get monetary policy that maintains the real value of Sheldon Adelson's assets and delivers him an employer-friendly labor market while leaving ordinary Americans unemployed.  (Cooper's post is good on laying out how well Bernanke knows how to fix things, and how he suddenly isn't interested in doing the fixing.  This is a sign that the problem is political support and not knowledge.)

With small countries that are broken down into more homogenous units, you have a somewhat better shot at aligning the interests of policymakers and people.  It's not perfect -- you could still end up in North Korea.  But it avoids the EU situation where one part of the monetary unit has control and doesn't care about anyone else.

It's an old story, and you should get Amartya Sen to tell it to you.  Put India in the hands of the British, and Churchill starves millions of Indians to death between fantasies of having Gandhi stomped to death by elephants.  Put India in the hands of the Indians, and massive death by starvation becomes a thing of the past.  Aligning the interests of people and policymakers is a big part of how good policy is made and bad policy is avoided.  Democracy is a really important way to do this.  But being small helps in some respects too.
Posted by Neil Sinhababu at 8/04/2012 03:16:00 AM

And if failing to provide more monetary stimulus despite the clear need results in a conservative Republican winning the Presidency, Bernanke and presumably most of the rest of the Fed is okay with that end result.