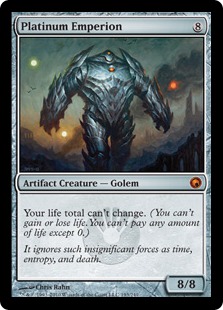 I'm very happy to see both Yglesias and Krugman discussing the platinum coin option, which would allow President Obama to deal with the debt ceiling without making unnecessary concessions to Boehner and the House Republicans.

If you missed it last time around, the short story is that there's a law allowing the Treasury Secretary to mint platinum coins of arbitrary denominations. Nobody thought of using it to generate trillions of dollars of new money when they passed it -- it was simply supposed to be for commemorative coins. But it gives Obama (through Geithner) the power to order the minting of a trillion-dollar coin. Deposit it at the Federal Reserve, and you're a trillion dollars further below the debt ceiling. Frankly, I'm curious to see if we could take advantage of the current economic environment with its deflationary pressures to mint a few trillion dollars worth of coins and take a big bite out of the national debt, blowing the minds of Pete Peterson and the Fix the Debt people.
Posted by Neil Sinhababu at 1/03/2013 08:18:00 PM

I like Josh Barro's idea of minting the coins, then trading the existence of the coins, and the authority to mint more, for the removal of the debt ceiling in perpetuity.

It bugs the hell out of me that Obama is almost certainly not going to mint the coins. In a negotiation with this much on the line (and it IS a negotiation, like it or not), you don't want to unilaterally give up any leverage at your disposal.

The other side is willing to blow up the economy to get what they want. Obama's job as President is to deny them that power, if at all possible. Use the Constitution, use the platinum coins, or even just order the Secretary of the Treasury to disregard the existence of the debt limit, and take a stand that if Congress won't do its job, then the Executive must take it upon itself to minimize the consequences of that failure. And invite them to impeach him if they don't like it.