In Which James Taranto Learns About A Neat Thing Called "Law"

Over at the Wall Street Journal, James Taranto comments on my support for prosecuting Bush Administration officials who approved torture. Matt Yglesias was thinking about a Eastern-Europe-style outcome where we don't put people in jail but just establish a social consensus against torture. I objected that we weren't likely to get a social consensus anytime soon, due to the power of right-wing forces in the media. Matt was sympathetic to my concern. Now here's Taranto, writing to an audience in front of which he can use the phrase "Angry Left" without anybody thinking about how it's angry leaders on the right, not the left, that ordered the torture of the innocent:

What troubles Yglesias and Sinhababu, then, is the existence of disagreement and debate--the essence of democracy. They seem to imply that prosecution is a method by which to force the consensus they would like to see. But a forced consensus is no consensus at all.

There's a very good reason why I'm troubled by "the essence of democracy" here. Holding criminal trials democratically, in the court of public opinion, is widely and correctly understood to be a bad way to do things. Instead, we should have criminal trials overseen by professional judges or carefully selected and well-informed jurors who understand the law in detail and are committed to interpreting and applying it correctly to an often complicated set of facts. This is how you set up the rule of law. It's a good thing to have.

The method Matt was suggesting -- changes in public consensus without prosecuting people -- is an interesting alternative for cases where many number of your political administrators (including talented people who know how to oversee road construction and keep public order and regulate the financial system and such) are embedded within an undemocratic regime that commits massive evils. You don't want to lose lots of good administrators after you become a democracy, and you don't want their self-interest and their connections operating against you to destabilize the country. So you have a de facto amnesty, or a Truth and Reconciliation Commission or some such, and make the price of entry into the new system be clearly abandoning the bad old ways and accepting the new consensus. There are reasons unhappy with this, as it often gives people amnesty for terrible crimes. But arguably in some situations it's what you have to do.

For a variety of reasons, I don't think the situation in the contemporary United States resembles that very closely. And in any event, the Truth and Reconciliation method is a special method for special situations. The first option, when you're looking at possible criminal acts, is to let the ordinary procedures of the legal system run their course. We do this with ordinary criminals, and if there's enough evidence of criminality in the most powerful positions, we should follow these procedures there too. Let the rule of law be respected, and as Amanda wrote before Taranto, hope it forces consensus in the way that fairly conducted judicial processes properly do. Simply put, we have laws against torture. 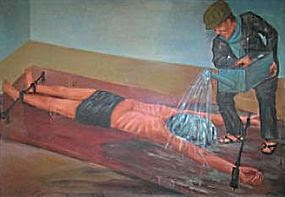 If those now in power yield to the temptation to use authoritarian means--however well-intentioned their ends may be--they will set a precedent that their opponents, perhaps equally well-intentioned, may one day use against them.

If by "authoritarian means", you mean "the judicial system figuring out whether someone broke the law, instead of trying them in the court of public opinion," that's what we want. If Barack Obama, anyone in his administration, or future Democrats go around engaging in serious violations of domestic and international law, they should be punished. If Obama's administration breaks the law by ordering captives to be tortured (let's leave aside the point about relying on a North Korean torture manual used to extract false confessions for political gain), he should be prosecuted as well, by whoever follows him of whatever party. I think Barack Obama is a very smart guy who cares about doing the right thing, but I think he should be subject to the law just like everybody else.

Insisting on this is what keeps us from falling into what's more traditionally understood as an authoritarian system -- one in which leaders are able to do whatever they'd like, unconstrained by the rule of law.
Posted by Neil Sinhababu at 4/24/2009 11:21:00 AM

jesus, that taranto post is so bad-faith it's staggering. if the american people demand harsh torture after a hypothetical future attack, it's obama's fault for opposing moderate torture!

especially annoying: the notion that obama would "criminalize" the prior administration. they "criminalized" themselves when they *broke the dang law.* they are "criminals." the only question is, do we treat them as such.

Yeah, I tried to respond to the parts where I could say something interesting, instead of the parts that were too bad to allow for any sort of illuminating response.