Why Conservative Senators Don't Want To Talk About Cases

I still in an honest-to-God, no-joking way don’t understand why conservatives who want to vote “no” don’t just say something normal like “I thought Justice Souter voted the wrong way on a number of important cases, I think Judge Sotomayor is likely to vote in a similar way to Souter; I would prefer a judge who votes like Justice Roberts or Justice Scalia; therefore, I’ll vote no.” That’s not insane, it’s not offensive, it’s not foolish, it’s not bizarre—it’s something you’d have to respect.

One part of the answer is in this Nate Silver chart: 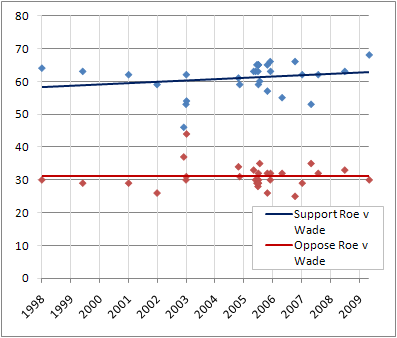 Most conservative Senators, and especially those who harbor secret or not-so-secret hopes of someday being president, don't want to go around saying "I want to see Roe v. Wade overturned." Given that public sentiment in favor of Roe is roughly double the opposition to the decision, this would stick them with a highly unpopular position and damage their chances in a presidential general election, or at least make it tough to win over moderate voters back home.

This is why there's a rather elaborate system of code words involving "activist judges" and "originalism" and "legislating from the bench". As far as I can tell, a real originalist would be a strikingly activist judge, but never mind -- these words are mainly meant to be used as code for a set of preferred case outcomes, not to clearly articulate any sort of sophisticated judicial theory. The words sound pretty enough if you don't know the code, so conservatives are quite happy to say them to everyone.

Since Sonia Sotomayor doesn't have a very long record of abortion-related pronouncements, and since the dittohead bloc wants to see her attacked as insufficiently supportive of white people's interests, the strategy takes on its current flavor. But in the end, the barriers to just saying "I'd like someone who votes differently on a bunch of important cases" are the same. Roe is a hugely popular and significant decision. If you come out and say that you're voting against liberal nominees because of the cases, people are going to ask you if you're just voting to overturn Roe. And you don't want to answer that question.
Posted by Neil Sinhababu at 7/14/2009 02:27:00 PM