I Misagree With Michelle Malkin 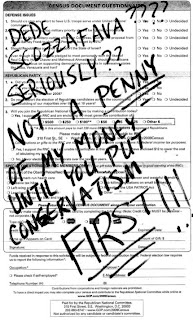 Better a donkey in office that acts like a donkey than a donkey in elephant’s clothing making a complete ass of the GOP.

In the short term, it's best for the Malkins of the world to grow somewhat stronger within their party, generating more intraparty conflict that creates more NY-23 situations where a fractured GOP helps Democrats win elections. Aside from occasional outliers, Republicans aren't going to provide any bipartisan support for legislation. So the party might as well be run by crazy people that freak out independents and lose elections.

I've been convinced (partly by some smart commenters) that over the long term we'd like to see a non-lunatic GOP, since at some point they're going to control everything again and we don't want insane leaders. But the question of how we get these long-term changes in the Republican Party from our current position is a complicated one. I don't know whether the quickest path goes through fiery intraparty civil war or through some kind of reconciliation. Whatever it is, it's going to be a long and winding path.

When it's clear what's good in the short-term but you have no idea what helps in the long-term, you go with your short-term good. So I'm quite happy to see Malkin say what she says, and I wish her a little more power for a little while.

Isn't that generally referred to as "concern trolling?"

No. 'Concern Trolling' is a term used by people too illiterate to know the word 'disingenuous'. It's like when you say 'conversate' because you're too stupid to know the word is 'converse'.

Disingenuousness is a broader concept than concern trolling. Concern trolling is when you disingenuously offer harmful advice while pretending to be concerned that the advised party will take some contrary action that you in fact believe will advance their interests. So misagreement isn't concern trolling. As I understand the suggested definition, it doesn't require that you be offering any party any advice and it requires that you believe they should do what they intend to do. You don't believe their action will advance their interest, but you egg them on.

I've been convinced (partly by some smart commenters) that over the long term we'd like to see a non-lunatic GOP, since at some point they're going to control everything again and we don't want insane leaders. But the question of how we get these long-term changes in the Republican Party from our current position is a complicated one.

I would agree that hw the GOP finds its way back to sanity is a complicated question (I just don't see how they get there from here), and due to that, I'd disagree that we necessarily want a non-crazy GOP in the long run.

I think we're in very uncharted political territory right now. The crazies we will always have with us, but a diminishing number of sane people will want to share a party with them, especially as their power in the party continues to grow.

I think the GOP would have to get quite small before it would be open to a takeover by sane people, and by that point, it would make more sense for the Dems to figure out how to split themselves into two parties.

If the Dems aren't thinking about this, well, shame on them, because this really IS a priceless political opportunity.

If the only political alternative to the Dems is the GOP, then the GOP will post some gains in years when the Dems aren't looking too good. But if the Dems can turn the game into one between two intraparty factions, so that one faction gains when the other does poorly at governing, then the GOP might be shut out of the action altogether.

Cyclist, I think the structure of American politics turns the scenario you describe into conservative Democrats going and taking over the micro-GOP. And that's a way to end up with a reasonable Republican Party.