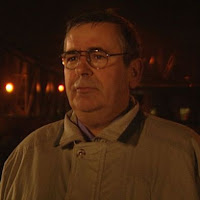 I hadn't heard the story Dana tells about the day the Berlin Wall came down, but it's kind of fascinating in how ordinary and human it is. After being handed a badly written note at a minor press conference, a confused Politburo spokesman mistakenly claimed that East Germans would be allowed to cross the border. And then:

During the evening news broadcast in West Germany, the anchor Hanns Friedrichs joyfully proclaimed that the ninth of November was a historic day, for the East German government had announced that its borders were open. East Germans who listened surreptitiously to the Western broadcast immediately gathered at the gate. Within an hour, thousands had gathered at the Wall.

In a nearby possible world, this story ends with a bloody riot. Armed guards shoot the boldest of the misinformed citizens; the uninjured retaliate. Guards are killed, the police put down the riot, and the Wall stands, not forever, but for a little white longer as the Soviets eased into openness.

In this world, Harald Jäger, in command at the Bornholmer Gate, decided not to shoot. He called his superiors, who of course had heard of no such policy change, and faced with the gathering, chanting crowds, decided to let a few cross the border; by midnight, he simply opened the gate to all, not taking names or checking identification.

During the protests in Iran, I was hearing from lots of smart people that what usually decides the fate of nonviolent protests against authoritarian governments is the behavior of the security forces. If they refuse to beat or shoot the protestors, the regime loses its control over the people and collapses. But if they carry out their brutal orders, everything ends in tragedy. That's the choice that faced Harald Jäger twenty years ago, and he made the right one.