It's Hard Out There For A High School Grad 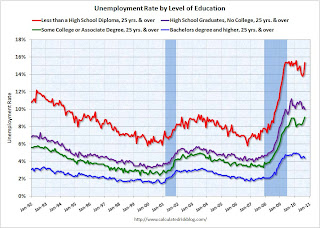 This is small comfort for the unemployed I know who have college degrees (and even law school degrees!), but things are much, much worse out there for eevryone else. Part of this is possibly because unemployed college grads don't always report as unemployed, but mostly it's simply because the current long-running recession is unpleasant but bearable for those with college degrees. Things get dramatically worse the further down the education totem pole you gon.

Via Felix Salmon, it's also worth noting that the number of discouraged workers has increased 71% in the past year, so while the headline unemployment number remains below 10%, in practice we're looking at something much closer to an effective unemployment rate of 11% or higher.
Posted by Nick Beaudrot at 10/08/2010 12:46:00 PM

It's hard out there for high school grads. So they will vote, if they vote at all, for lunatics who will further sabotage their job prospects. It makes me want to drink heavily.

It's hard out there for high school grads, so they'll vote, if they vote at all, for people who will further sabotage their job prospects. It makes me want to drink heavily.