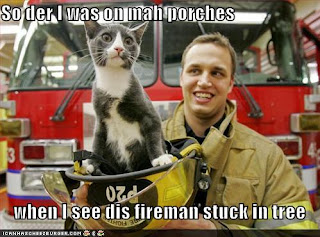 By now you're probably heard the story of Gene Cranick, whose house burned down while firemen watched because he didn't pay the $75 fire protection fee. I get the economic reason why the firemen wouldn't save his house -- if they do the work for free, they don't give anybody else an incentive to pay. Matt's idea that the fire service should've just charged $10,000 an hour or something for firefighting seems right to me. I wonder why they didn't do that.

But what really needs to be criticized here is the whole idea of a private fire department. The fire protection business, especially in a sparsely populated rural area, isn't something where you're going to get multiple businesses competing. So the usual arguments for a free-market system -- businesses are going to compete to offer a consumer the best price, the best businesses will survive, and consumers will end up better off -- don't apply. When you're stuck with a monopoly, you aren't going to get the benefits of free markets, so you might as well make it a government monopoly and give the citizens the ability to control it through voting.

I remember an old hilzoy post about how back in the 70s the battles were between free-market fundamentalists and socialists who thought the government should run everything. People who thought that these decisions should be made on a case-by-case basis, with focus on the particular circumstances involved, were in the middle. Over the next couple decades, the socialists all more or less disappeared and now it's free-market fundamentalists versus case-by-case types like me and most of the Democratic Party. Even if I'd disagree with the socialists on lots of stuff, I wish they were still a major force, because then the case-by-case types would have decisive influence.
Posted by Neil Sinhababu at 10/06/2010 03:30:00 AM

When you're stuck with a monopoly, you aren't going to get the benefits of free markets, so you might as well make it a government monopoly and give the citizens the ability to control it through voting.

And it's not just that either. I don't think I've seen anyone -- especially not conservatives or libertarians -- asking "why the heck didn't Mr. Cranick just pay the measly $75?"

Even ex ante, I would think that passes any rational sort of cost-benefit test.

The answer, obviously, is that just like the rest of us, Mr. Cranick isn't necessarily perfectly rational all the time. Two minutes of paperwork could have prevented this catastrophe. He just forgot to do it.

That sort of everyday irrationality is the elephant-sized pimple in their philosophy that conservatives are always trying to paper over with the "personal responsibility" line. It's all very well for the privileged, who have the wealth to bail themselves out of most of their errors, or hirelings to do their thinking for them.

The problem for the rest of us is that you can't make people into rational robots just by punishing them harshly enough.

I agree, Jack... especially when one brings in the sheer number of separate things that one might have to contract for separately in the libertopia.