Overrepresentation of Small States In The Electoral College, Again

Highlighting yet another way in which small states have an outsized influence on American politics, each individual voter in a handful of small states with only one or two Representatives carries far more weight, as measured by the share of each electoral vote per voter, than the voters of a mid-sized state like Minnesota or Wisconsin. Here's the infoporn from the New York Times: 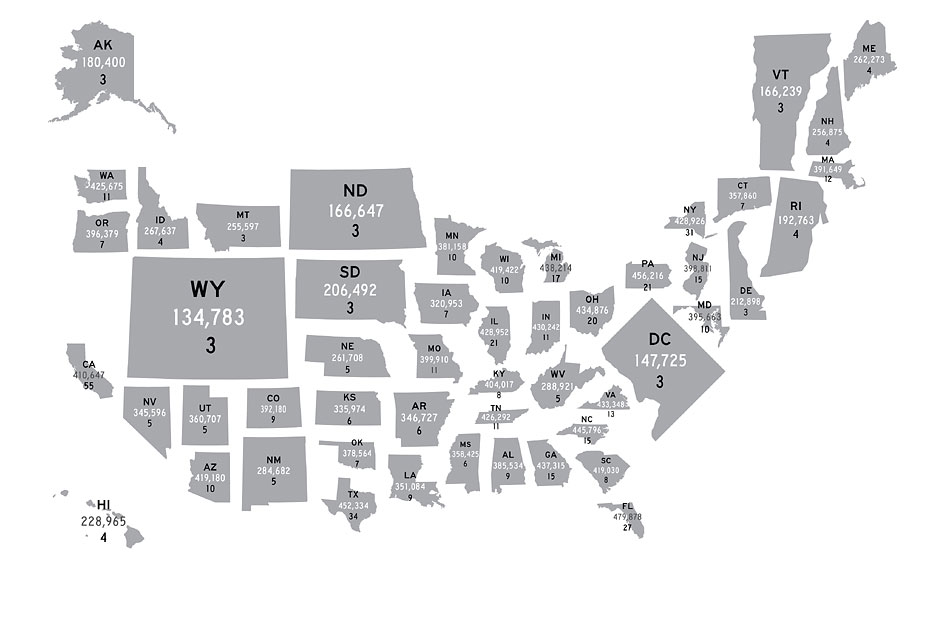 There are two obvious but totally politically unfeasible solutions to this problem is to either re-jigger the Senate to give any state with at least three Representatives a third Senator, and then any state with at least, say, seven or eight Representatives a fourth Senator. The structure of constitutional reform makes this more or less impossible unless the residents of small states collectively lose their minds.

The other solution would be to start eliminating states. You could make Wyoming into part of Montana, Colorado, or Utah; collapse the Dakotas into one state; collapse New Hampshire and Vermont into one state; and give the portions of DC where people live back to Maryland (leaving a handful of government buildings under Federal control). At that point, Alaska and Rhode Island would have the lowest number of voters per electoral vote at 180K and 192K, respectively. I have no clue what the procedure is for eliminating a state, but I'm sure this is a total non-starter.

Update: Astute and long-time reader Colin recalls that I once suggested tripling the size of the House of Representatives, which would, among other things, solve the quantization problem that gives Wyoming et al. additional voting power in the Electoral College. And indeed, this may be the least unfeasible solution to the problem.
Posted by Nick Beaudrot at 10/12/2010 07:30:00 AM

Not to nitpick, but including DC in this is a little deceptive since we have, you know, zero votes in Congress.

Also, if you're going for non-starter ideas anyway, I like the idea that someone (you? Yglesias?) brought up a while ago of expanding the house to actual proportional representation with 1500 or so seats, and abolishing the Senate altogether.

Combining states is definitely a non-starter, since the constitution says you can't change state boundaries without the state's permission.

If we just want to fix the Electoral College there's already a much simpler—and constitutional—solution that's partway towards being realized.

If on the other hand we're talking about fixing the Senate, that's a whole nother kettle o' fish...

Or we could just, you know, abolish the electoral college and have the President elected based on the popular vote. That accomplishes your goal much better or simply than trying to increase the representation of large states in the electoral college. Since it requires a Constitutional amendment, it's basically a non-starter of course.

While I agree with your larger point, the graph is just dreadful. The eye is going to read *areas* as proportional to influence per voter. South Dakota should appear to be twice as big as California. Here it looks to have 7 or 8 times as much area.

The National Popular Vote bill would guarantee the Presidency to the candidate who receives the most popular votes in all 50 states (and DC).

Every vote, everywhere, would be politically relevant and equal in presidential elections. Elections wouldn't be about winning states. No more distorting and divisive red and blue state maps. Every vote would be counted for and directly assist the candidate for whom it was cast. Candidates would need to care about voters across the nation, not just undecided voters in a handful of swing states.

Now 2/3rds of the states and voters are ignored -- 19 of the 22 smallest and medium-small states, and big states like California, Georgia, New York, and Texas. The current winner-take-all laws (i.e., awarding all of a state’s electoral votes to the candidate who receives the most popular votes in each state) used by 48 of the 50 states, and not mentioned, much less endorsed, in the Constitution, ensure that the candidates do not reach out to all of the states and their voters. Candidates have no reason to poll, visit, advertise, organize, campaign, or care about the voter concerns in the dozens of states where they are safely ahead or hopelessly behind. Policies important to the citizens of ‘flyover’ states are not as highly prioritized as policies important to ‘battleground’ states when it comes to governing.

The bill would take effect only when enacted, in identical form, by states possessing a majority of the electoral votes--that is, enough electoral votes to elect a President (270 of 538). When the bill comes into effect, all the electoral votes from those states would be awarded to the presidential candidate who receives the most popular votes in all 50 states (and DC).

The bill uses the power given to each state by the Founding Fathers in the Constitution to change how they award their electoral votes for president. It does not abolish the Electoral College, which would need a constitutional amendment, and could be stopped by states with as little as 3% of the U.S. population. Historically, virtually all of the major changes in the method of electing the President, including ending the requirement that only men who owned substantial property could vote and 48 current state-by-state winner-take-all laws, have come about by state legislative action, without federal constitutional amendments.

The bill has been endorsed or voted for by 1,922 state legislators (in 50 states) who have sponsored and/or cast recorded votes in favor of the bill.

A far simpler solution is to drop the Senator part of the electoral college vote equation -- each state gets as many electoral college votes as it has representatives. Under such a revised electoral college, Gore would have won in 2000. As I argue there, I think NPV is a bad idea - "under the NPV system, Maryland would routinely risk forfeiting its electoral votes to a candidate its voters didn’t favor — a candidate who necessarily only won elsewhere, in elections that were by definition completely unaccountable to Maryland voters." To make sense, NPV would have to go hand in hand with a federally run, uniform voting and anti-vote suppression system -- which doesn't sound like an easy sell to me.