Go For It! Part Deux 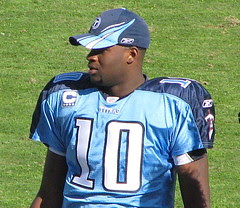 Towards the end of yesterdays Cardinals-Titans game, I tweeted, "ARI up 17-13. 4th and 1 on TEN 44, 6 minutes to go, Go for it! #whatwouldbillbelichickdo". I'm pretty sure he would. After all, your opponent's 44 is almost the definition of the "Maroon Zone": too close to punt, but too far to kick a field goal. On the ensuing drive, the Titans completed a bomb that took them to Arizona's 24 yard line. The receiver fumbled, but the Cardinals couldn't make anything out of their next possession. After punting to the Titans' one yard line, Vince Young drove his team ninety nine yards for the game-winning TD.


This sequence highlights the basic premise of go-for-it boosters. To win, your opponent needs to score points. To score points, your opponent needs the ball. If you go for it on fourth down and get it, you deny your opponent the thing he needs most: the ball. Had the Cardinals decided to go for it with 6 minutes left, they could have gone into their four minute offense to burn some clock. If they could make it just another 10 yards, they'd be in field goal range, meaning the Titans would have needed overtime or a 2-point conversion to win the game. In an era of weaker offense and lower passing completion percentages, punting made more sense. In todays high-octane offense times, holding the ball becomes more important.

The "Maroon Zone," huh? I've been calling it the "dead zone" for 30+ years, but have long thought I needed a better name.

And that goes back to even before they changed the rules so that after a failed field goal, the defending team got the ball where it was kicked from, rather than the line of scrimmage, which of course widened the zone, by whatever name one gives it.

And yeah, I've been disgusted for all that time with teams punting on situations like fourth and six from the 35.

I'm still not convinced of the virtues of going for it on fourth down when you're well inside your own half of the field, but almost anytime you're inside your opponent's 40, but beyond the reliable range of your FG kicker, damned straight you should go for it. You just don't have that much to lose.