Thanks to reconciliation instructions, they needed to improve the budget impact by at least $1 billion in the sidecar. They improved it by exactly $1 billion. Which goes back to what I've now said several times: the CBO process has now been so thoroughly gamed that it's useless.

She and I seem to disagree about the purpose of the CBO. On my view, it's there to help us assess the fiscal consequences of various policies. Assuming that the CBO's estimates are accurate, it's a wonderful thing that our leaders can figure out what the CBO is going to say. Then decisions will be guided by accurate information.

Megan, on the other hand, thinks that the CBO process is 'useless' since it can be 'thoroughly gamed'. Perhaps she thinks that its purpose is to inject an exciting element of unpredictability into social policy. (Or perhaps to block Democrats from using government to solve major social problems. But I'd rather think of her as a thrill-seeking daredevil, so I'll stick with 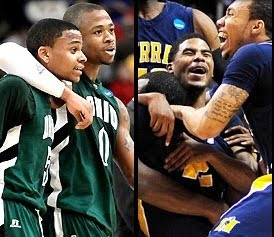 the former interpretation.) She doesn't have any specific criticisms of the CBO's methods, so her point isn't that they're inaccurate. It's just that they're predictable.

I recommend that Megan look away from health care reform and focus more on college basketball. Yesterday's action was full of exciting and unexpected events. Hardly anyone expected 14th-seeded Ohio to beat 3rd-seeded Georgetown or lowly Murray State to eliminate Vanderbilt. Watching Armon Bassett lead Ohio to victory with 32 points on just 17 shots would've given her a more thrilling experience of the unpredictable than anything Doug Elmendorf was likely to do.
Posted by Neil Sinhababu at 3/19/2010 03:14:00 AM

1) Reading McMegan is a surefire way to raise your blood pressure while leaving you less informed.
2) Why is this surprising? The Dems had numerous earlier cost and gains from various decisions. Didn't Reid have them score about five different proposals during the interminable delay last summer?
2) Gaming estimates.

The only real madness is anybody who wants to be informed actually reading McArdle anymore.