Obama's Glass: More Than Half-Full In Some Places; Less In Others 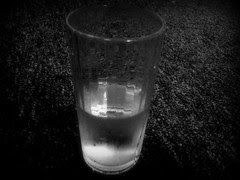 As Kevin Drum points out, in the grand scheme of things the Obama administration is two-for-three on the major priorities of the day. Health care reform happened, even if it wasn't pretty. And our misadventure in Iraq has come to an end. In addition, Don't Ask Don't Tell has finally been repealed (and credit to Harry Reid for basically daring Republicans to vote against a standalone bill), the financial reform bill, compromised as it was, was certainly better than what would have happened under a Republican President. Behind the scenes, the Obama administration has made progress on rebuilding the country's regulatory apparatus in various places, notably EPA and antitrust but also mundane but important agencies such as the FDA, FCC, and so forth. Those are some serious high lights.

The lowlights are also pretty clear:
It's hard to say that the bad outweighed the good here. The first two years of the Obama administration alone mean that he will end up as the most progressive President since LBJ (or, if you like the Kennedy/Johnson years) when it comes to domestic policy, and the mess in Afghanistan pales in comparison to what we had in Vietnam. If he ends up working out an awful Social Security "compromise", that could change the calculus, but we'll have to see what happens there. I have a hard time believing anyone wants to look like they're cutting Social Security during a Presidential Election year. For now, though, a solid A- for Team Obama.

A-? Talk about the soft bigotry of low expectations. ;)

In my mind, the biggest problem was accepting the 60 vote threshold as legitimate.

I just can't give him higher than B to B+ because of that. It's subjective, but when we will have such majorities again?

Seriously, though, compared to what? Yes, he could have done a better job on judicial and executive branch appointments. But HCR is really the lynchpin of the welfare state, DADT happened, and we're more or less done with Iraq. Afghanistan is a downer, but how much of one? At the very least it was clear in '09 that he was unhappy with the generals' lack of exit planning and forced them to think about it. Civil liberties is a wreck but name me the modern President who has voluntarily curtailed civil liberties abuses. Accepting the 60 vote threshold might have led to better HCR and finreg proposals, and a larger stimulus, but by how much? This seems like a difficult problemt to quantify.

Well, I agree it's difficult to quantify. Let me try a few ways. :) These are, obviously, rough.

* Larger stimulus - you could run models of +25% to +100% and see how they would have affected unemployment. I'm not sure what the range for extra stimulus would have been, but I think +25-100% is reasonable.

* I think people have quantified public option/non-public option differences during the big debate, no?

* You could quantify the effects of Medicare-for-All (single-payer) as a baseline for HCR.

* How many undocumented immigrants are there that would/could gain citizenship? The effects of the DREAM Act?

* Carbon Pricing -> global warming. Maybe there weren't 50 votes for a full-on version, but perhaps a half-assed compromise could have passed.

* Overall tax rates - go back to Clinton rates for those over $250k.

* Time wasted waiting for filibusters to ripen on votes that passed easily. (I am conflating a 50-vote threshold with time-sink reforms ... but I don't think that's too unfair.)

NOTE: Iraq, DADT, Afghanistan are probably about as good as could be expected from what we heard from O's campaign. Civil liberties not so much. If O really cared about civil liberties he would use them to investigate Fox News, Rush, & Palin. Only then will R's repeal them.

Low expectations, indeed... And a fair amount of rationalization, too. "most progressive president since LBJ ... better than what would have happened under a Republican administration" -- are we measuring "progress" in counterfactual terms now? (Is Berlusconi progressive because at least he didn't start a fascist movement?) Progressive, my foot...