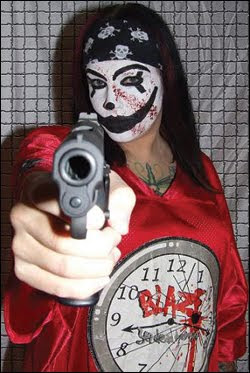 The picture at right, given the filename "juggalette-with_possible_firearm_-atf_file_photo_www_red-alerts.jpeg", is Figure 6 from the FBI 2011 National Gang Threat Assessment, which makes 44 references to Juggalos. I didn't realize that Juggalos were a gang. I thought they just liked to go around listening to bad music and drinking Faygo.
The following certainly came as news to me: "NGIC reporting indicates that Juggalo gangs are expanding in New Mexico primarily because they are attracted to the tribal and cultural traditions of the Native Americans residing nearby." Maybe that's how they plan to figure out how magnets work. In any event, that's more impressive of them than I would've thought, unless they're just going there to see if they can score some peyote.
In other FBI Gang Threat Assessment commentary, whose idea was it to call a gang the "Oriental Fantasy Boys"?
Posted by Neil Sinhababu at 11/02/2011 06:03:00 PM